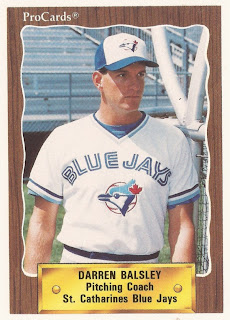 San Diego Padres ace Jake Peavy had nothing but praise for his pitching coach Darren Balsley in 2006, according to The San Diego Union-Tribune.

Peavy knew Balsley as Balsley had also coached Peavy in the minors, The Union-Tribune noted.

"He is very positive," Peavy told The Union-Tribune of Balsley in September 2006. "He says the right thing. First and foremost, he's positive. That's the biggest thing. He puts positive thoughts in your head and makes you more self-confident."

Balsley has now been instilling that self-confidence in Padres pitchers for a decade, taking over the position in mid-2003.

Balsley's career in baseball began in 1984, taken by the Athletics in the third round of the January draft, out of Palomar College in San Diego County, Calif.

As a player, Balsley spent three seasons in the Athletics system, playing the final season at single-A Modesto. For 1987, Balsley moved to the Blue Jays system, playing 1988 and 1989 at AA Knoxville, ending his playing career.

Balsley turned coach in 1990, staying with the Blue Jays, assigned to short-season St. Catharines. He then remained in the Blue Jays system as a coach through 1999, ending as a coach at Knoxville.

Balsley served with the Padres in San Diego, first under manager Bruce Bochy, then under Bud Black. And he continues in that role for 2013.

In 2010, it was Black who was praising Balsley, praising him to Sports Illustrated.