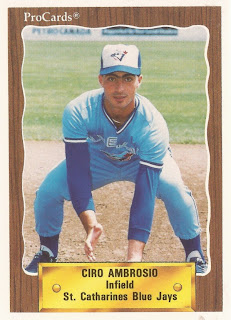 "It's a special feeling going out a champion … this one is back to back for us," Ambrosio told The Great Neck Record that June, "and next year we go for back to back to back."

That year also held personal significance for Ambrosio. He notched his 100th career victory as a high school coach.

Ambosio turned to coaching after success in college as a player and a brief professional playing career. His pro playing career spanned just two seasons.

Ambrosio's brief professional career began in 1990, taken by the Blue Jays in the 30th round, out of Long Island University.

He closed out his college career with 66 hits and 52 runs scored in 1990, good for fifth and second in school history respectively.

With the Blue Jays, Ambrosio started with short-season St. Catharines. He got into 68 games and hit .245. He largely played shortstop.

He returned for 1991, but he only got into five games. At single-A Myrtle Berach, Ambrosio picked up one hit in six at bats, ending his professional career.