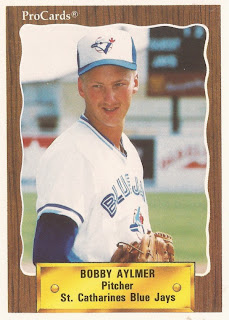 Bobby Aylmer was a reliable closer for his Fordham Rams in 1988. His 13 saves that year set a school record. They were also one off the national lead.

Those 13 saves also came in a total of 33 appearances for Aylmer on the season, according to the Fordham record book. Both marks are still school records, only the saves mark has been tied.

Aylmer came out of Fordham two years later, taken by the Blue Jays in the 33rd round of the draft.

But the success he had in college, he couldn't continue into the pros. His professional career ended after just two seasons with two career saves.

Aylmer ended up staying at Fordham for his full four seasons, playing there from 1987 to 1990. In all, he got into 69 games for the Rams, then a school record and still sixth all-time.

His 19 career saves also remain tied for the school record. His career ERA there was 3.23, still 13th all-time.

With the Blue Jays, Aylmer started at short-season St. Catharines. He got into 12 games there, saving two. He also saw eight games at high-A Dunedin. In those eight games, he gave up three earned runs over 16 innings of work.