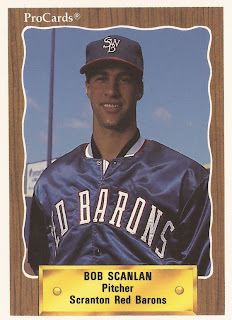 Bob Scanlan was excited warming up for his major league debut at the Astrodome, he told The Chicago Tribune.

Once on the mound, though, the Cub Scanlan was calm enough to throw seven-plus innings without giving up an earned run.

"I just tried to concentrate on the catcher's mitt and to remember what Dick (pitching coach Pole) told me," Scanlan told The Tribune. "He said, 'Just throw strikes . . . let them hit it in this big park.'"

Scanlan went on to throw strikes for parts of nine seasons in the majors, pitching into 2001. Scanlan has gone on to continue his career in baseball, as a broadcaster for the Padres.

Scanlan's career in baseball began in 1984, taken by Phillies in the 25th round, out of Harvard High School in California. He played that first season in the rookie Gulf Coast League, moving to single-A Spartanburg in 1985.

Scanlan made AA Reading in 1987, going 15-5, with a 5.10 ERA. He got his fourth win in mid-May, an outing where he walked five. Along with the win, Scanlan focused his comments to The Reading Eagle on his five walks.

"I'm really disappointed about my five walks," Scanlan told The Eagle. "That's usually not the way I pitch."

Scanlan hit AAA Maine in 1988, returned to Reading for 1989, then made AAA Scranton again for 1990. He was then traded to the Cubs in April 1991 with Chuck McElroy for Mitch Williams.

He was then in Chicago getting that first win by early May. By mid-May, Scanlan was going seven innings against his former team the Phillies, giving up just one earned run.

Scanlan ended up gettign 13 starts and 40 total outings that year, posting an ERA of 3.89. Going into 1992, Scanlan was set to make the transition fully to reliever, a role Scanlan was fine with.

"I'm not really worried about it," Scanlan told The Tribune. "My role is to get people out. And that's what I'm going to go out there and do."

By 1994, Scanlan was with the Brewers, traded there in a three-player deal. With Milwaukee, Scanlan went back to starting, starting 12 games that year and 14 in 1995.

Scanlan went through the Tigers and Royals in 1996, getting into 17 games between them. Going into 1997, Scanlan was released by the Royals as spring training ended. Without another team to sign with, Scanlan went to Mexico.

"You really have to want to stay in the game to go down there," Scanlan told The North County Times in 2006. "Some of the towns you stay in are really small, and it's a challenge just to find food. But it's similar to winter ball in the passion they have for the game. Guys play ball down there because they love to play baseball."

Scanlan's trip there was rewarded with a contract from the Padres. Scanlan played out the year at AAA Las Vegas, never making San Diego.

In 1998, Scanlan signed on with the Astros, getting 27 appearances with Houston. He then got two more outings with Milwaukee in 2000, then 18 final games in 2001 with Montreal, ending his big league career. Scanlan's playing career ended two years later, in 2003.

Scanlan has since returned to San Diego as a broadcaster with Channel 4 San Diego and, more recently, as an analyst for Padres radio. In March 2011, Scanlan talked about Padres pitcher Matt Latos and his efforts to continue his success.

"I think he's understandably and naturally put a lot of pressure on himself," Scanlan told The San Diego Union-Tribune. "That's not totally unusual for a young guy when you put that kind of a burden on him, that label, 'You're gonna be our ace, our number one guy.' "