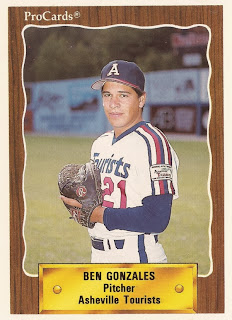 Ben Gonzales pitched well for high-A Osceola in 1992, well enough to make the league All-Star team in June. He already had five wins in relief, with an ERA of 1.89, according to The Orlando Sentinel.

And he continued his All-Star work through the end of that season, getting 60 relief appearances in all, picking up seven wins, three saves and an ERA of 2.06.

For Gonzales, though, his career didn't last much longer, just a single season more. It ended in 1993, his sixth season as a pro, Gonzales never making the majors.

Gonzales' career began in 1988, taken by the Astros in the 27th round, out of Cypress College in California.


With the Astros, Gonzales played his first year between short-season Auburn and the rookie Gulf Coast League. In 22 outings between the two, Gonzales finished with a 2.08 ERA.

For 1991, Gonzales moved to single-A Burlington, going 7-7 over 60 outings. Then came his 1991 All-Star season at Osceola. By late-July, Gonzales had a 75-inning streak without giving up a home run broken, according to The Sentinel. But he still recorded the win.