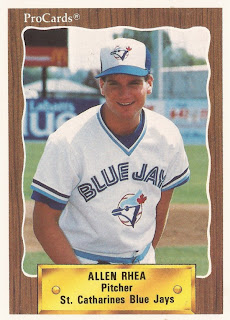 Former Milligan College hurler A.R. Rhea had an idea in 2010, and that idea involved him and others getting back out on the field, according to The Johnson City Press.

"I started talking to A.R. about three or four weeks ago, and the idea got kicked around," Milligan coach Nathan Meade Meade told The Press. "We've got 30 guys confirmed right now and are expecting five or six more. Guys have been calling left and right."

For Rhea, it was a chance to get back on the field again, a field at Milligan that he amassed several Milligan career pitching records, records he still holds, according to The Press.

It was also a chance to get back on the field after his own professional career ended quickly and Rhea ended up moving on to another profession: Sports Medicine.

Rhea's brief professional career began and ended in 1990, taken by the Blue Jays in the 17th round of the draft out of Milligan in Tennessee. Rhea is also known as Allen Rhea.

With the Blue Jays, Rhea was assigned to short-season St. Catharines. He got into 16 games, four starts, picking up two wins and four losses. His ERA was good, at 3.22.

From there, Rhea went into his second career, as a physical therapist back home in Johnson City. He got there by going back to school, getting a degree in physical therapy from the University of Tennessee, Memphis in 1994.

Degree in-hand, Rhea works in Johnson City, with a special interest in throwing athletes and golfers, according to his bio at Appalachian Orthopaedic Associates. He also serves as an adjunct faculty at East Tennessee State University's physical therapy program.