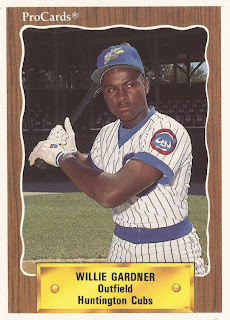 Willie Gardner wanted to do his best playing in his first professional season at rookie Huntington, he told team officials.

"I want my team to have a winning season and I want to improve my skills," Gardner is quoted as saying on his card back.

Gardner improved his skills enough to get time in two more affiliated seasons after that first one, but he couldn't improve them enough to make AA.

Gardner, though, continued his career years later in independent ball, not playing his final game until 2000.

Gardner's career began in 1990, taken by the Cubs in the 17th round, out of Tupelo High School in Mississippi.

That first year at Huntington Gardner hit .298 over 52 games. He hit three home runs, knocking in 27. He hit one of his home runs in a late-August game, and a diving catch in the outfield in another.

Gardner moved to short-season Geneva for 1991, getting 54 games there. He also got nine at single-A Peoria. Between the two levels, he hit just .248 with five home runs.

In 1992, Gardner played full-time at Peoria. He stole 12 bases on the year, including one in August at Waterloo. His average, though, dropped to .184. It was his final year in affiliated ball.

Gardner didn't return to the game until five years later, in 1997 for his hometown independent club. He played 54 games, hitting .309. He then returned for 22 games in 1998 between Tupelo and independent Massachusetts.

Gardner played his final season in 2000, with 40 games back at Tupelo, ending his career.