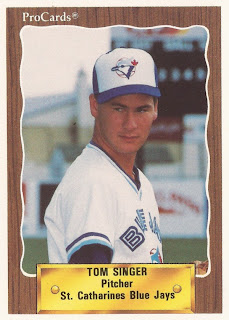 While Singer's opponent that day, Mussina, went on to star in the majors, Singer's career never made it to the bigs. Singer ultimately played in seven professional seasons, never making it to AA.

Singer's pro career began in 1990, taken by the Blue Jays in the 10th round of the draft, out of St. John's. He went to St. Johns out of Monsignor McClancy High School in East Elmhurst, NY.

Singer started with the Blue Jays at short-season St. Catharines. He got into 13 outings, four starts. He posted a 4.66 ERA.

For 1991, Singer moved to single-A Myrtle Beach, turning full-time starter. He also went 3-8. From there, he moved to Dunedin, staying in Dunedin for three-consecutive seasons.

In his first season at Dunedin, Singer went 10-7, with a 4.00 ERA. One of those wins came in May, with a no-hitter. That no-hitter earned him Florida State League Player of the Week honors.

Singer went 9-11 in his second season there, then turned reliever in his third. His third season at Dunedin also proved his last in the Blue Jays system.