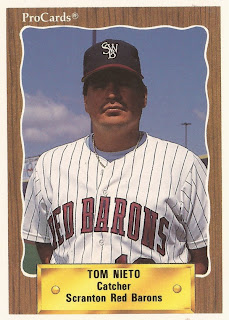 Tom Nieto got his call up from AAA Louisville, but the turnaround was quick.

The result, The Associated Press wrote, was a major league debut that saw Nieto score one run and knock in two others on a double.

"I only had eight hours to get over here," Nieto told The AP afterward. "But it turned out to be a great day."

From that first good day, Nieto went on to have others. And he would have them over a major league career that spanned seven seasons. He's also gone on to a long career as a coach in both the minors and the majors, continuing in 2013 as a manager in the Gulf Coast League.

Nieto's career began in 1981, taken by the Cardinals in the third round of the draft, out of Oral Roberts University in Oklahoma.

With the Cardinals that first year, Nieto got into 33 games, hitting .279, with three home runs. He returned to St. Louis for 95 games in 1985. He also got into three games that October, two of them in the World Series.

In Game 5, Nieto was involved in a controversial play. The catcher thought he'd tagged the Royals' Jim Sundberg. Sundburg was called safe. The Royals went on to win the game. Nieto threw down his mask in protest of the call.

"I thought I tagged him right there on the side, by the waist," Nieto told The AP later. "I thought I got him before he got to the plate."

Nieto returned to the majors for 30 games with the Expos in 1986, then 41 with the Twins in 1987. He then finished out his major league career with appearances through 1990, with the Twins and Phillies.

Back managing in the minors by 2009, Nieto took the helm of AAA Rochester in 2010. Taking the job, he told local cable news station YNN he knew the AAA world well.