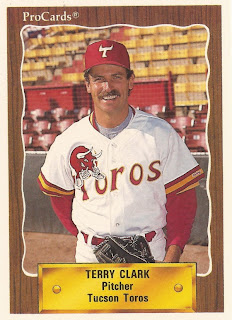 It was something Terry Clark had always dreamed about, he told reporters afterward.

He'd pitched five innings of a major league game, just enough to qualify for a win. He'd also given up just one run.

"I told myself 'You got here, did the job, and now sit back and enjoy it,'" Clark told The Associated Press after that July 1988 game.

"You're in the minor leagues, doing well and nothing ever happens," Clark added later to The AP, "and you begin to wonder if it will happen or not. I just kept plugging away and swinging away."

Clark got there, his first major league start, after a decade spent in the minors. He was originally drafted by the Cardinals in 1979 in the 23rd round.

Clark went on to a professional career that spanned 21 seasons, six of those with time in the majors. His first three major league seasons and his last three also came with four years in between.

Clark's professional career began at rookie league Johnson City in 1979. He pitched 23 games in relief, posting a 1.97 ERA. Over the next three seasons it was two years at Gastonia and one at St. Petersburg, all single-A.

Granted free agency after 1985, Clark signed on with the Angels, the team that would finally bring him to the majors. He played 1986 at AA Midland, again as a reliever. But in 1987, at AAA Edmonton, Clark tried his hand at starting.

He got his call-up the next July. In that first game, against the Indians, Clark picked up the win. Pulled after the fifth, Clark watched the rest of the game from the clubhouse.

"I pretty much remember every batter, every pitch, every out, every inning," Clark told The Toledo Blade afterward.

Clark won his next two and overall started 5-0, including a complete game against Seattle. Later, on Aug. 27, he pitched a complete game shutout against the Yankees. "I wanted the shutout real bad," Clark told The AP afterward. "It feels great."

Clark finished out his first season 6-6 with a 5.07 ERA, hit by a bad September. He returned to California for 1989, but this time for four games. He was called up for an injured Chuck Finley.

Signing with the Astros for 1990, Clark got into one game for Houston that year. It was his last major league game until 1995. In the meantime, he spent another four years in the minors, playing at Tucson, Colorado Springs, Rancho Cucamonga, Wichita and then Richmond.

He finally returned to the majors with the Braves for three games, then with the Orioles for 38. He split 1996 between Kansas City and Houston, playing 17 games between them. In 1997, his final year in the majors, Clark pitched in 13 games between Cleveland and Texas.

In early August, claimed off waivers from Cleveland, Clark pitched Texas to a 4-3 win.

"Terry was very impressive," Texas Manager Johnny Oates told The AP afterward. "He showed what hitting spots and changing speeds can do for a pitcher."

Clark finished out his playing days back where he started, in the minors. He played 1998 with the Rangers at AAA Oklahoma, then with Oakland at AAA Vancouver.

Clark's baseball career has continued in the years since, as a pitching coach. In 2010, Clark was back in Oklahoma City, coaching for the RedHawks and watching over prospects like Derek Holland.

"He's not ready to go back to the big leagues," Clark told OKCRedHawks.com in July 2010. "He needs one more start, maybe two. We'll see how he does. But he's going to have to show me his hard slider and throw his changeup for strikes before he goes anywhere."