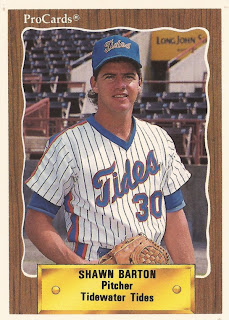 Shawn Barton got his first taste of the majors in August 1992, after eight years as a professional. He worked the next two years back in the minors, finally returning to the majors in 1995.

Once back, he told The Los Angeles Times that August, his mission was to stay.

"I told myself that once I got back up [to the majors], I was going to prove that I could pitch at this level or move on with my life," Barton told The Times. "This has been my lifelong dream. It's overwhelming. I hope it continues."

It did continue. It continued for 52 games that year and seven more in 1996. Barton's career ended that year, having played professionally for 13 seasons, three of those with time in the majors.

Barton's professional career began in 1984, taken by the Phillies in the 21st round out of the University of Nevada, Reno. He played that first year at short-season Bend. The left-hander went 4-5 that first year with a 2.16 ERA.

After returning to Reading, Barton worked with Manager George Culver to improve his pitching, he told The Reading Eagle after a complete game win that June.

"He worked with me about changing my mechanics," Barton told The Eagle. "It caused me to keep the ball down most of the night. That's what my main concern was."

Barton was sent to the Mets in spring 1988, traded in a three-player deal. He got another look at AAA that year, before arriving there for all of 1989. Released by the Mets in June 1990, Barton played the remainder of that year with the Braves at AA Greenville.

After two more seasons in the minors, the Giants brought Barton back up in May 1995. In his 52 appearances that year, Barton posted a 4.26 ERA. In his seven games in 1996, Barton gave up nine earned runs in 8.1 innings.

Barton has gone on to be a pitching coach, starting in 1997 and running through 2006. In 2010, Barton served as an area scout for the Diamondbacks.

In 2006, Barton was evaluating and teaching pitching at single-A Hagerstown, watching over such pitchers as Jonathon Niese.