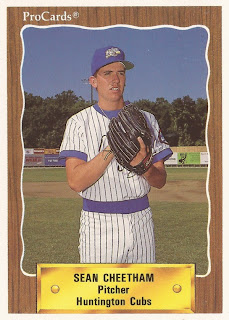 Sean Cheetham went through a hot streak for the Huntington Cubs in July 1990, sending the hitters he pitched against into cold ones.

In one game that July, Cheetham struck out 13 Kinston batters, The Chicago Tribune wrote. Those batters brought his strikeout total to 42 over 31 innings of work.

Cheetham ended up doing well enough at Huntington to make it up to short-season Geneva by year's end. His career, though, lasted just two more seasons, cut short by injuries.

Cheetham's career began that year in 1990, taken by the Cubs in the fourth round of the draft, out of Woodbridge High School in Virginia.

Cheetham had signed on to play baseball at the University of North Carolina that fall, having posted a 0.92 ERA at Woodbridge his senior year. In one high school game in May, he gave up a single hit to claim the victory.

With the Cubs, Cheetham arrived at rookie Huntington. There, he got 12 starts, posting a 2.38 ERA. He also struck out 83 over 76.1 innings of work. In late-August, Cheetham made his move to Geneva, getting two more starts there.

Cheetham later underwent shoulder surgery, trying to rehab the injury in the semi-pro leagues playing first base and outfield, according to The Fredericksburg Free Lance-Star. He hit a home run in a game, but he never made it back to the pros.
1990 CMC-Pro Cards Tally
Players/Coaches Featured:1,251
Made the Majors: 696 - 55.6%
Never Made Majors: 555-44.4%-X
5+ Seasons in the Majors: 298
10+ Seasons in the Minors: 178
Posted by Steve78 at 1:00 PM