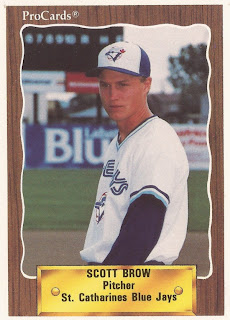 Scott Brow made the Arizona Diamondbacks in 1998. The way he learned about it, though, left him guessing until the last moment, he told The Tucson Citizen afterward.

That came after being called into his manager's office, he recalled to The Citizen.

"He brought us in and said that they put off the inevitable as long as possible," Brow told The Citizen. "He then said, 'You made the team.'"

Brow won his spot on the Diamondbacks that spring, returning to the majors for his fourth season. It also turned out to be his final season, Brow ending his big league career with 59 total appearances.

Brow's career began in 1990, taken by the Blue Jays in the seventh round of the draft, out of the University of Washington.

He played that first year at short-season St. Catharines, then moved to high-A Dunedin for 1991 and 1992. In April 1993, having hardly pitched above high-A, Brow made his debut in Toronto.

With the major league Blue Jays that year, Brow got into six games, starting three, spaced through the season. He posted a 6.00 ERA.

In mid-July, back at AAA Syracuse, Brow threw a complete game against Scranton, winning 4-1.

"For the most part, it wasn't much different from my games the past month," Brow told The Wilkes-Barre Times Leader afterward. "But I got some breaks. There were some balls hit pretty good right at guys."
Brow returned to the majors for 1994, getting into 18 games in relief, with a 5.90 ERA. The next year, though, Brow didn't make Toronto at all. He instead spent the season at AAA Syracuse.

To start that season, Brow had hopes of returning. Those hopes were quickly put on hold as he put up a 10.57 ERA over his first two st arts at Syracuse, according to The Syracuse Post-Standard.

"If I knew what was wrong, I wouldn't be sitting here having this conversation right now," Brow told The Post-Standard that April. "I wish I could say I'll work on this, work on that and everything will be great."