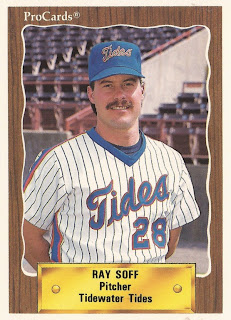 It was a short outing that, for Ray Soff, ended a lifetime of anticipation.

On Sept. 1, 1986, Soff came in to pitch the eighth inning, holding the Cardinals to a run. Cardinals hitters soon turned that deficit to a lead and Soff found himself with the win, his first in the majors.

Soff got that first major league win in his eighth professional season. The reliever would go on to pick up three more that season in 30 total outings. He would pick up one more in 1987. Those five big league wins would be the only wins Soff got in the majors.

Soff's career began in 1979, taken by the Cubs in the 11th round of the draft out of Central Michigan University.

Soff signed with the Cubs forgoing a season of college ball. In high school, he also pitched on two state championship teams.

With the Cubs, Soff started at short-season Geneva, getting into nine games, starting eight of them. He went 2-3.

Soff debuted with the Cardinals July 17, a one-inning outing where he gave up a hit and a walk. His first win came in his 16th outing, Sept. 1. His second and third wins came quickly, Sept. 5 and Sept. 10.

"It's more luck than anything," Soff told The AP after his third win. "I happened to be in there when we scored. We've been scoring runs late in the game."

Soff played out the season at Louisville. He also continued playing in the minors through 1992. He moved to the Twins system in 1988, playing at AAA Portland.

He joined the Mets system in 1989, playing out that year and the next two at AAA Tidewater. Soff's final season came in 1992, with the Angels at AAA Edmonton.