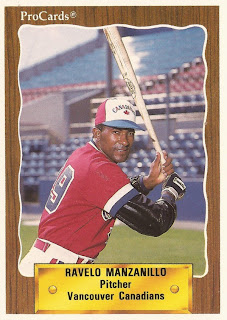 Ravelo Manzanillo spent a year out of the pros before he made the majors. He then spent six years trying to get back.

Manzanillo made the White Sox in 1988, after spending the previous year pitching in New York's Central Park. He then didn't make it back to the majors until 1994, with the Pirates, the team the originally signed him more than a decade earlier.

"I never gave up," Manzanillo told The Associated Press after making Pittsburgh in April 1994. "I know I can play up here, I always have. I can throw four pitches and throw them good."

Manzanillo didn't just make the Pirates that year, the left-handed reliever pitched in 46 games, posting an ERA of 4.14. He played in five more major league games the next year and he continued playing, most recently recorded pitching in 2005, in the Mexican League.

Manzanillo's career began back in 1980, signed by the Pirates out of his native Dominican Republic. His brother Josias Manzanillo would later follow Ravelo to the pros, and the majors.

He tried to fix those control problems in the winter of 1983-84, back home, throwing at a target on a fence, The Nashua Telegraph wrote. Manzanillo got just 14 outings, 13 starts. He went 4-4, with a 4.24 ERA. He also returned to Nashua for 1985, his last season in his first stint with the Pirates.

He played 1986 in Mexico, but left after being robbed, he told The Pittsburgh Post-Gazette years later, upon his return to the Pirates. Then came his season in Central Park, and a second chance with the White Sox. That second chance landed Manzanillo in single-A.

"I didn't want to play A ball," Manzanillo told The Post-Gazette. "I was 24 years old. But my mother said, 'Son, go play A ball. You never know."

Manzanillo went to A ball. He then got called up to Chicago in September. He started two games, giving up six earned runs in 9.1 innings. After a debut, where the lefty gave up two runs in four innings, White Sox manager Jim Fregosi found room to compliment Manzanillo, telling The Chicago Tribune Manzanillo had a "helluva" arm.

By late June 1994, Pirates manager Jim Leyland liked what he saw in Manzanillo.

"He's done an outstanding job and the thing I really like about him is nothing seems to bother him," Leyland told The Washington Observer Reporter. "You put him into tight jams and he never seems afraid."

Five more games for the Pirates in 1995 and his major league career was over. He went on to play AAA for Seattle, independent ball in the Northeast League, in Korea and then Mexico, finally ending his career.