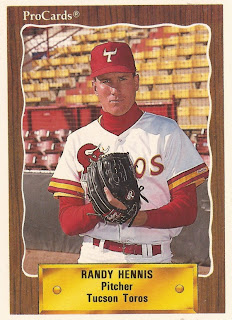 After the major league debut Randy Hennis had - 9.2 innings over three outings, giving up one hit to close out 1990 - there was no reason to think he wouldn't soon be back to the majors for more.

But, ten starts into his 1991 campaign, pitching at AAA Tucson, shoulder problems quickly ended his season. The series of surgeries that followed conspired to ultimately end his career.

"For me, the dejecting part was the ups and downs you have to deal with," Hennis told The Houston Chronicle in August 1993 as he attempted to mount a comeback in A-ball. "You go through so many setbacks, and you're wondering, 'Did I reinjure it?' or, 'What's happening now?' You really go on a roller-coaster ride of emotions as far as how you feel about your baseball future."

For Hennis, that roller coaster never got him back to where he had once been, the majors. That successful start he had with the Astros also ended up being his final stat line: 9.2 innings pitched, 1 hit allowed, ERA of 0.00.

Hennis' professional career began in 1987, taken in the second round of the draft out of UCLA, by the Astros.

He played his first year at short-season Auburn, moving to single-A Osceola in 1988. At Osceola, Hennis turned in a 7-3 record over 14 starts, including a 2.40 ERA.

"We expect a solid year from Randy Hennis," Nelson told The Sentinel. "He can only get better as he gets more pro innings under his belt."

"I know it was the last game of the season and they might have helped me out by swinging at everything," Hennis told The Chronicle after that last game, "but this is a good one to go home with."

Then came his shoulder problems. Hennis started 10 games back at AAA Tucson, but his shoulder bothered him almost straight through, The Chronicle wrote.

Years later, though, Hennis recalled to The Chronicle the one moment when his problems came - pitching in a game, he heard a "pop."

"I struggled to finish that inning, came off the mound and said, 'I'm done,'" Hennis told The Chronicle in 2012. "I knew something was seriously wrong. I had surgery in August, but my arm never improved."
He missed all of 1992, finally making it back on the field for 1993. He played that year and the next, but never made it higher than high-A again.

Hennis went on to spend time as a coach in the minors, including three seasons at AAA and in 2001 at high-A Brevard County.