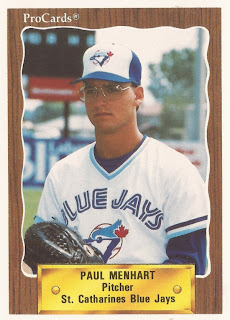 Paul Menhart missed one month with an elbow issue, then, in winter ball, he heard a snap. That snap was something terribly wrong inside that elbow, according to his hometown New London Day.

After reconstructive surgery on that elbow, Menhart was throwing again by April 1994, with plans to get back on the field by late-July. He also had bigger plans than that, he told The Day.

"My ultimate goal is to get called up on to Toronto on Sept. 1," Menhart told The Day.

Menhart's goal ended up not being possible. He also ultimately ended up not pitching in a formal contest at all that year. But he wasn't that far off. He ended up getting his call to Toronto soon after, in April 1995, making his major league debut.

Menhart's path to that major league debut began in 1990, taken by the Blue Jays in the 8th round, out of Western Carolina University.

With the Blue Jays, Menhart started with short-season St. Catharines, also getting time at single-A Myrtle Beach. He moved up to Dunedin for 1991, going 10-6, with a 2.66 ERA.

After missing all of 1994 to injury, Menhart rehabbed, and got his call to the majors in late-April 1995. A month later, he got his first big-league start. In that first start, he pitched into the sixth, giving up five earned runs. Three of those were runners he left on base, his reliever allowing them to score.

"I don't know if my arm got tired," Menhart told The Toronto Globe and Mail afterward. "But I got winded. It's not something I've experienced before. It's not that I'm out of shape, but I haven't exerted myself that much over the past 18 months."

Menhart ended up getting into 21 outings for the Blue Jays that year, starting nine of them. His ERA ended up at 4.92.

That Aug. 2, though, Menhart threw a gem, an eight-inning complete-game one-hitter. He also took the loss, losing to Mike Mussina and the Orioles. That start came in his second appearance after getting called back to the bigs.

"When Paul was sent down, he wasn't pitching all that well, but I think it was more that we wanted him to pitch regularly," Toronto pitching coach Galen Cisco told The Day later. "Considering he didn't pitch at all last year, this kid's done a great job."

Menhart returned to the bigs for 1996, getting 11 outings, six starts with Seattle. He then got nine outings, eight starts with San Diego in 1997, ending his big league career. He continued playing in the minors, though, through 2001, last playing in the independent Western League.

In November 2012, Menhart praised young Nationals prospect Erik Davis, who was named to the team's 40-man roster. Davis was another player who came back from injury, and doing it quickly. Davis debuted in Washington in June 2013.

"He needed to find out who he was after the knee issue," Menhart told MASNSports.com in November. "I am a big fan. He earned this opportunity. The kid turned his whole career around in one year."