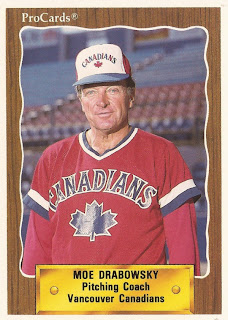 Speaking to his hometown paper in 1992, longtime baseball man Moe Drabowsky said he didn't think coaching could be as enjoyable as playing.

"But," Drabowsky told The Hartford Courant, "it has been great. You get to know these kids, and experience their pleasures in the game, share in their disappointments. There are great psychological rewards."

Drabowsky spoke to The Courant having been involved in baseball in some form or another for more than 35 years. He'd spent 17 seasons in the majors as a player. He'd spent several years since as a coach in both the majors and the minors.

Drabowsky's playing days ended in 1972, having earned a reputation as a top pitcher in the emerging field of relieving. He played for nine organizations over 17 seasons. His most famous relief appearance came in Game 1 of the 1966 World Series, 6.2 innings of one-hit ball, picking up the win.

Out of the game, Drabowsky returned in 1976 to model new White Sox uniforms, the ones with the shorts. The White Sox were the final team he played for. In 1984, Drabowsky continued in another area for which he is known, practical jokes. He put a live snake in a bread basket at a Baltimore luncheon.

It was relief work that got him back to the majors for 1986. Drabowsky then served as one half of a new approach to pitching coaches. Drabowsky served as relievers coach.

"There's a lot of nonproductivity in the bullpen," Drabowsky told The Chicago Tribune before accepting the position in October 1985. "I can tell you there are great brats in Milwaukee, and the best fried chicken is in Chicago. And, from my years, a lot of guys play cards."

The experiment, though, didn't last long. A poor start in 1996 had Drabowsky gone by May.

Drabowsky caught on elsewhere in the White Sox system. By 1989, he was pitching coach at AAA Vancouver, watching over pitchers like Tom Drees. Drees that year, threw three no-hitters at Vancouver. Despite the no-hitters, Drabowsky told The Associated Press Drees needed to show more consistency.

By 1994, Drabowsky was back in the majors, with the Cubs as pitching coach. By 1996, he was minor league pitching coordinator for the Orioles.

Drabowsky passed away in 2006 at the age of 70. In his obituary, The AP quoted him from 1987, talking about the differences between pitchers when he pitched and then. He also referenced his history of practical jokes.

"Players seem to be more serious now," The AP quoted Drabowsky as saying. "I would tend to believe they don't have as much fun. You don't find the same kind of characters in the game today. Egos are a big factor. And the guys are making so much money."