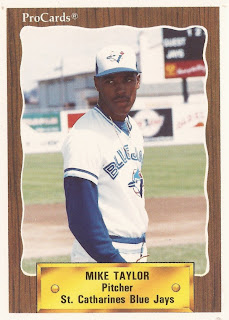 It took the rain to come for Salt Lake City hitters to get some relief in this August 1991 game. They didn't have any before that, thanks to Medicine Hat's Mike Taylor.

That's because Taylor shut down the Trappers for six innings, according to The Deseret News. He did so by giving up just three hits and walking two in the rain-shortened 3-0 Medicine Hat win.

Taylor threw that game in his third professional season. He got just one more season. He never made it to AA.

Taylor's career began in 1989, taken by the Blue Jays in the 13th round of the draft, out of Hillsborough High School in Tampa, Fl.

Before the draft, Taylor was set to go to Hillsborough Community College, according to The Lakeland Ledger. Instead, he chose to sign with the Blue Jays.

With the Blue Jays, Taylor played his first year between rookie Medicine Hat and single-A Dunedin. Between them, he went 6-6, with a 4.24 ERA. With Dunedin, Taylor got three outings, giving up three walks and two wild pitches in one April inning.