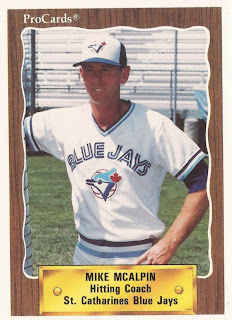 It was a powerful message for students at New Jersey's Holy Cross High School, one McAlpin wasn't sure would get the same reception if he gave that speech himself, McAlpin told The Associated Press.

"If I say that, the kids think, 'Aw, that's just the dumb algebra teacher talking," McAlpin, an assistant coach at the school, told The AP in April 1987. "But if Greg says it, because of who he is, they tend to listen."

McAlpin, though, wasn't just an algebra teacher. He was a teacher with several years of association with the Blue Jays, as both a scout and a minor league coach. He would continue that association with the team for a total of 14 seasons, ultimately serving as hitting coach at AA Knoxville.

McAlpin's career with the Blue Jays was underway by 1980, serving two years with the team as a scout, according to his card back.

On the side, though, McAlpin served as a coach and teacher at Holy Cross High School in his hometown of Delran, NJ.

For 1986, though, McAlpin stepped down from his head coaching job there to focus on his work with the Blue Jays, having returned to scouting, according to The Philadelphia Daily News. McAlpin, though, stayed on as an assistant coach.

With the Blue Jays, McAlpin resumed coaching in 1988, at short-season St. Catharines. He stayed there through 1990. For 1991, he moved to Knoxville. He's last credited as coaching there in 1993.