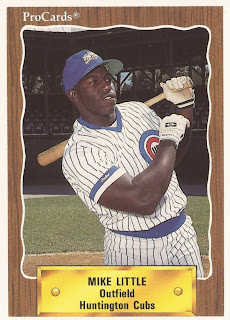 The bases were loaded and Mike Little's Peoria Chiefs were down by two. The team needed a hit.

Little came to the plate and came through, with a bases-clearing double, according to The Burlington Hawk Eye. It was a game Peoria went on to win.

Little hit that double in a year where he hit one other bases-clearer, a grand slam. Those came in his third season as a pro. He went on to get two more seasons, but he would never see the majors, or AA.

Little's career began in 1989, taken by the Cubs in the 16th round of the draft out of Biloxi High School in Mississippi.

With the Cubs, Little started at rookie Wytheville, hitting eight home runs and knocking in 25 over 51 games. He also hit just .217.

For his second season, Little stayed in rookie ball, moving with the club to Huntington. There, he hit .221 over 38 games, hitting seven home runs. One of his home runs came in early-July win, another in a late-August contest.

Little moved to single-A Peoria for 1991, hitting that grand slam at one point. He also improved his average to .274, hitting a total of 10 home runs.

Little made high-A Winston-Salem in 1992, but it was a short season. He got into just 47 games, hitting .240 and hitting three home runs. It was his final season of affiliated ball.