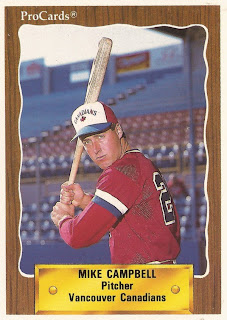 Mike Campbell was a regular starter for the Mariners in 1988. But he was an inconsistent starter, going 6-10 over 20 starts.

Going into 1989, though, Campbell hoped to have a better season and the Mariners hoped the same.

"I hope I'm a key this year," Campbell told The Associated Press that spring. "I hope they're counting on me for big things because I'm counting on myself for some really big things."

For Campbell, though, big things were largely behind him. He started just five games for the Mariners that year. He played in just three more seasons after that, his last coming in 1996.

Campbell's career began in 1985, taken by the Mariners in the first round, out of the University of Hawaii at Manoa.

Campbell started at single-A Salinas then moved to AA Chattanooga in 1986 and AAA Calgary in 1987. At Calgary, Campbell went 15-2 in 23 starts. He also earned a promotion to Seattle in July.

With the Mariners in 1987, Campbell went 1-4 in nine starts with a 4.74 ERA. It took him until his eighth start, though, to get that one win. The win was a complete-game where Campbell gave up just one run. It also came in Seattle, where Campbell spent his youth.

"It's a dream come true winning my first major league game right here in Seattle where I grew up," Campbell told The AP.

Campbell then came back for those 20 starts with Seattle in 1988, getting those six wins to 10 losses, with a 5.89 ERA. He started the year with the team, but was sent back to Calgary in June after starting 3-8.

But he was back in Seattle in August, with seemingly better luck.

"I used to stick more with my curve ball. Now I'm throwing a slider for strikes. That's the biggest difference," Campbell told The AP after a late August win. "I'm relaxing and not putting pressure on myself."

He got just one game with the Rangers in 1992, a relief outing. His next big league time came in 1994, three outings with the Padres. His last big league time then came in 1996, with the Cubs. With Chicago, Campbell went 3-1, with a 4.46 ERA in 13 outings, five starts, ending his major league career.

Campbell continued playing, though, into 1999. He played 1997 in Japan with the Yokohama Bay Stars. He then returned stateside to play his final two seasons in independent ball.