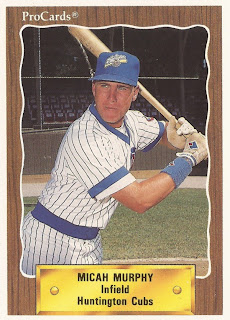 It wasn't a clean hit, but the shot off Micah Murphy's bat did the trick.

In the eighth inning of this June 1990 contest, Murphy's Huntington Cubs were trying to mount a comeback. The ball off Murphy's bat helped do that, because the fielder couldn't pick it up properly, The Portsmouth Daily Times wrote.

Trying to get the lead runner, the fielder misfired, causing the tying run to score and Murphy to take second, The Daily Times wrote. It was Murphy who then scored the winning run.

That game took place in Murphy's second season as a pro. It also would be his last, Murphy never making it to single-A.

Murphy's career began in 1989, taken by the Cubs in the 30th round, out of Lee College in Baytown, Texas.

With the Cubs, Murphy started at short-season Geneva. He got into 50 games there, hitting just .175. He also hit a home run and knocked in 11.