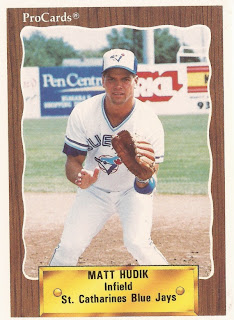 Ohio University's Ethan Newton was speeding his way near the school season stolen base record in 2012, according to The Ohio University Post.

The school record Newton was chasing was held by Matt Hudik, who swiped 24 bases in 1990. Newton never caught up, ending the 2012 season with 23, with Hudik still the record holder for 2013.

Hudik took that speed he showed at Ohio in 1990 to the pros. Hudik's run in the pros, though, was brief, just 18 games.

Hudik's pro career began and ended that year in 1990, taken by the Blue Jays in the 25th round out of Ohio.

At Ohio, Hudik played for two years, 1989 and 1990. For his career there, he swiped 34 bases, tied for fifth place all-time. He also won a school offensive efficiency award and was named first-team all-conference.