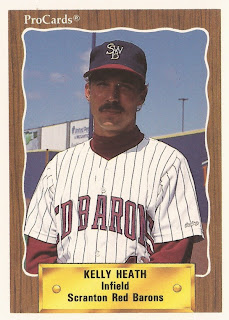 Kelly Heath replaced the Royals' second baseman Frank White in the bottom of the sixth, Kansas City already down 6-0.

By the time the inning was out, the Royals were down 8-0, but Heath took part in his first major league double play, serving as the second-base pivot to the action.

It was the start of Heath's major league career, a career that, unknown to anyone at the time, would end all of three innings later, Heath getting a single turn at bat.

While his major league career would end with that one game and one at bat, Heath's professional career continued for another eight seasons, finally ending after his 1990 campaign and 14 total seasons playing professionally.

His brief major league career and lengthy minor league one would be enough for Heath to draw comparisons to two late-80s baseball move icons. Heath could be compared to Field of Dreams' Moonlight Graham for his single at-bat. And he could also stand up next to Bull Durham's Crash Davis, for a professional career that spanned 14 seasons with that one, brief, call up to The Show.

In fact, he actually kind of did stand up next to Bull Durham's Crash Davis. Heath was actually in the movie, credited as a "core baseball player."

Heath's career began in 1977, taken by the Royals in the seventh round of the draft out of Louisburg College. And, while other draftees went to rookie ball, the 19-year-old Heath was sent straight to single-A Daytona Beach.

At Daytona, Heath hit two home runs and had a .232 average. But he had what The Daytona Beach News-Journal called the key hit in a July game with a two-run double. Aside from hitting, Heath was seen as providing defense.

"The addition of Frank McCann at third and young Kelly Heath at short has improved the left side of the infield," Royals farm director John Schuerholz told The News Journal that July, adding later, "Kelly Heath is very young. He'll mature from a playing standpoint and he's helping this club."

Heath made AA Jacksonville in 1978, hitting a better .268, and hit AAA Omaha in 1980. Heath played half that season at Omaha and then, aside from that brief time with Kansas City in 1982, the next decade at AAA.

Heath also got invited to spring trainings. In 1980, coming out of his second year in AA, Heath tied one early March contest with a ninth-inning, two-run single. He later hit two doubles in a late March win against Pittsburgh.

Invited to spring training 1982, Heath got two hits in one early March game and three in another. He also lost some playing time a week later, due to a jammed thumb he suffered tagging out a runner, according to wire accounts.

Coming out of spring training, Heath was expected to make the club, at least until another injury, one to teammate Onix Concepcion, healed. Heath played in his one game April 20. Concepcion returned April 29.

A writer for The Lawrence Journal-World noted in December Heath's 13 home runs led the team. He also got 65 RBIs. But, by then, Heath was tagged as a "no-prospect," and the Royals let him go. He was granted free agency and signed with the Yankees.

Heath spent two seasons with the Yankees at AAA Columbus, his best season coming in 1985 with a .257 average and 18 home runs. He also hit two home runs in a game that year and chased the starter with a third hit, a single.

From there, it was two seasons with the Braves system in Richmond. It was after his second season in Richmond that Heath signed on with the filming of Bull Durham.

From there, it was two seasons in Syracuse, his first one in 1988 resulting in a .310 batting average. His second, however, was short, just 29 games and a .205 average. Heath's final season came in 1990 with the Phillies at AAA Scranton. He hit .237 with seven home runs and he was done.

Heath continued his affiliation with the Phillies after that last playing season. He served as a minor league hitting coach for five seasons, then another season as a minor league manager, according to Baseball Cube.

More recently, he's served as a scout for Oakland and the Reds. With Oakland, he was credited with signing the 2002 No. 1 pick John McCurdy.

But, back to that game in April 1982. Heath came to bat in the top of the seventh, with Hal McRae, two batters ahead of him in the lineup, on first from a Milt Wilcox walk. With Wilcox facing Heath, Heath lined out to center.

In the ninth, with two outs, Heath was two batters away from returning to the batters' box with McRae again facing Wilcox. The game - and Heath's major league career - ended as McRae struck out.