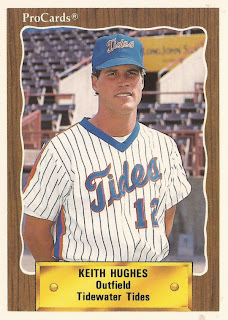 It took Keith Hughes 10 tries, but, in late June 1987, he finally got his first major league hit. And he made it count, just before his scheduled return to the minors.

Coming to bat in the bottom of the sixth, with two on, Hughes smacked a two-run double against the Pirates, breaking a 4-4 tie, giving his Phillies enough to hold on for the win.

"Now I can go back with some enthusiasm under my belt," Hughes told reporters afterward, referring to his impending trip back to AAA, according to The Beaver County Times, "some enthusiasm, instead of an 0 for my stay."

Hughes ultimately played in 41 major league games that year, 31 after the Pirates game. He also got 19 more major league hits, ending with a .250 average.

Hughes would see time in only three more major league seasons, ending in 1993. His playing career, though, and attempts to get back to the bigs, wouldn't end for two more seasons.

Hughes' playing career began in 1981, signed by the Phillies as an amateur free agent, out of Conestoga High in Pennsylvania.

Hughes started playing in 1982, at short-season Bend. He moved to single-A Spartanburg in 1983, then AA Reading in 1984. In mid-1984, the Phillies sent Hughes and another player to the Yankees for Shane Rawley.

He arrived back with the Phillies after another trade, one that sent Mike Easler to the Yankees for Hughes and another player. His first hit came in his sixth game and sixth plate appearance with the Phillies.

After continuing with several appearances in July, Hughes was back in Philadelphia as a September call-up. On Sept. 18, he got three hits in one game.

"The kid keeps making contact," Phillies manager Lee Elia told the Philadelphia Inquirer after that game. "When you put the ball into play consistently like he does, something good can happen."

Another trade in spring 1988 landed Hughes with the Orioles, a team where he got into another 41 games. Hughes joined the big club in Baltimore as the team tried to break out of it's record losing streak.

He went 7 for 12 in his first five games, prompting his new manager Frank Robinson to tell The Associated Press that Hughes "swings a nice bat. He's a sound hitter and he's good defensively."

Hughes, though, finished his 41 games that year with a .194 average. He didn't make the big club in 1989 and for 1990, found himself traded to the Mets. He got in eight games with New York that year.

He then went through the Yankees, Twins and Reds systems, before getting three final games in the majors, with Cincinnati, in 1993.

Hughes played 1994 in Mexico, then Hughes ended his career returning to AAA Omaha in 1995.

A religious man, Hughes reflected on his career in 1998, telling The Inquirer he hoped one day to enter the ministry. Then, though, he worked as a scout for the Royals.

"It's been God's plan unfolding,'' Hughes told The Inquirer. "From that one day I went to the tryout camp all the way through, it was 14 years. I could have been released at any time because I didn't put up great numbers.''