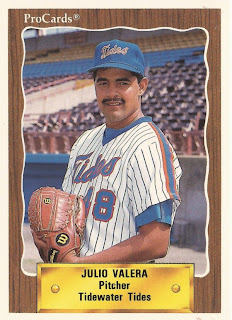 Once a Mets starting prospect, Julio Valera now found himself with the Angels. He also found himself thrust into a game, unsure exactly how to handle relief duties.

"After the first pitch," Valera told The Los Angeles Times in April 1992, "I said to myself, 'This is just another game. Go right at them.' After that, I got my fastball over and all my pitches over."

Valera had just been traded to the Angels earlier that month by a Mets team that had grown wary of his arm.

Signed by the Mets in 1986 as a free agent out of Puerto Rico, Valera developed, by one account, a slider with a "dastardly dip."

Three seasons in the low minors gave way in 1989 to promotion to AA Jackson and a taste of AAA Tidewater. He returned to Tidewater for 1990, making his Mets debut as a September call-up.

In six innings, Valera gave up five hits and three runs, a quality start that had the Mets impressed, according to the New York Times.

''Usually a kid his age comes up and he either throws 100 miles per hour or has a nasty hook,'' teammate Ron Darling told The Times of Valera's performance. ''But he seemed like he was a pitcher. All of his pitches move.''

Valera started three games for the Mets that September, posting a total 6.92 ERA. He had been expected to compete for a starting spot for the Mets in 1992, but a disastrous spring ruled that out.

According to the New York Times, Valera pitched winter ball against the team's wishes, then came in to spring training overweight. And it showed with another 6.30 spring ERA.

"I'd like to see the Valera I heard about," said Mets Manager Bud Harrelson told The NY Times after Valera's latest outing resulted in four first-inning runs. "The one that could make wicked pitches on the corner. I'll have to talk to him."

Valera only pitched in two games for the Mets that year, both in relief. He was dealt the next April to the Angels.

The main problem that year in 1993 was his elbow. It was shot by mid season. Surgery followed, ending 1993 and starting 1994 late. By April 1995, Valera was ready to return, but the Angels weren't yet sure, according to The Los Angeles Times.

"He's not quite where he was two years ago, but he's a long way ahead of where he should be," Angels Manager Marcel Lachemann told The LA Times. "His velocity is as good as it was; it's just a matter of maintaining it."

Valera never made it back to Anaheim. He returned in 1996, purchased by the Royals. With Kansas City, Valera pitched in 31 games, posting a 6.46 ERA and his major league career was done. A few more seasons in the minors and his pro career was done.