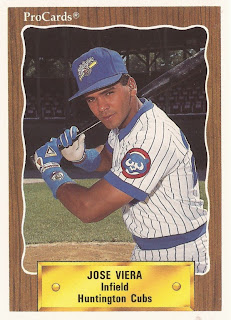 Jose Viera started slowly the first few games of 1995, maybe that was because he had hardly played the previous two seasons due to a shoulder injury.

But on this night in early April 1995, that shoulder seemed fine. On this night, he came into the game and hit a walk-off home run.

"Coming off the bench today, I was a little more relaxed," Viera told The Sentinel. "I went up there just trying to hit the ball hard somewhere to get us going."

Viera hit that walk-off home run in his sixth season as a pro. It was also his last in affiliated ball, Viera playing just a few more games that year for AA Orlando. Viera's career, though, continued later in independent ball, last playing professionally in 2002.

Viera's career began in 1990, signed by the Cubs as an undrafted free agent out of his native Puerto Rico.

With the Cubs, he started at rookie Huntington, getting into 65 games and hitting .331. He also hit eight home runs.

"I'm ready to play pro ball," Viera is quoted on his Huntington card back as saying as that season began. "I want to have a good season. My goals are to play major league baseball and continue my education."

In August, Viera put together a string of four multi-hit games. He hit a three-run home run in early August. Late that month, Viera helped his team with a double.

But then his shoulder problems came. In 1993, he made AA Orlando, but played in only three games. He didn't play at all in 194 and then returned to Orlando for 1995. Despite that walk-off home run, his return was brief, just 12 games. They were the final games of his affiliated career.

He isn't recorded as returning to the field until 1998, playing at independent Newburgh. He moved to Lehigh Valley in 1999. He last played in 2002, at independent Sioux Falls.

In independent ball, Viera hit more home runs. He hit 15 at Newburgh, then 23 at Lehigh Valley. In 2000, between Lehigh Valley and Somerset, he hit 40.