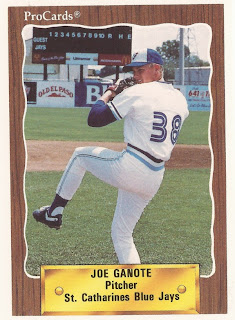 Michael Jordan's baseball career started off slowly in 1994, 0 for 7. Then he faced Knoxville's Joe Ganote.

In the third inning of that April game, Jordan smacked his first single, off a Ganote middle-in offering.

"This is definitely not the way I wanted my first ESPN highlight to go," Ganote told The Associated Press afterward.

Ganote was in his fifth professional season that year with AA Knoxville. He ended up making AAA Syracuse later that season. Ganote, though, would never make the majors. He also likely never got another national highlight.

Ganote's career began in 1990, taken by the Blue Jays in the 41st round of the draft, out of the University of North Carolina at Charlotte.

With the Blue Jays, Ganote started at short-season St. Catharines, moving to single-A Myrtle Beach and high-A Dunedin in 1991.

For 1994, Ganote did well enough at Knoxville early on to get his promotion to Syracuse. At Syracuse, he went 3-7, with a 4.10 ERA. Late in the year, Ganote pitched well in a Syracuse win, but had problem with walks, The Syracuse Herald-Journal wrote.

"I'm used to that," Ganote told The Herald-Journal. "I've been walking myself into jams all season."