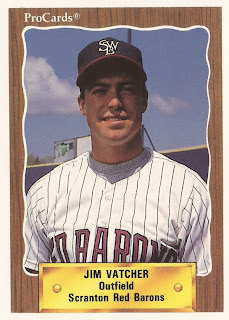 Jim Vatcher never really dreamed as a kid about being a major leaguer, he told The Philadelphia Inquirer in 1990. That's because he never thought he'd be good enough.

"But," Vatcher added to The Inqurier after his first stint in the majors, "once I got in professional baseball, you realize it's the only goal. So now, no matter what else, I'll be in the Baseball Encyclopedia. I can show it to my children and my grandchildren."

Vatcher's first stint in the majors lasted a month. After a brief stint back at AAA, he returned to play almost the rest of the season in the majors.

When it was all done, Vatcher had stories for his grandchildren about playing in three major league seasons and a decade in the minors.

Vatcher made the majors in 1990 in his fourth season as a pro. He started in 1987, taken by the Phillies in the 20th round, out of Cal State Northridge.

Vatcher played well at Northridge. But, The Los Angeles Times wrote, he was held back by his height. Vatcher was 5 feet, 8 inches tall. With that, he was a long shot to make the pros.

Vatcher told The Times in May 1987 he'd heard all the jokes about his height. He'd seen the outfielders move in when he came to the plate.

"But," Vatcher told The Times, "I'd lick my chops when I saw them move in. It has worked out well. I don't hear too many jokes anymore."

Vatcher began his pro career at short-season Utica, moving to single-A Spartanburg in 1988. He hit .302 at Spartanburg, then .327 the next year between single-A Clearwater and AA Reading.
After missing the team out of the shortened spring training, Vatcher started 1990 at AAA Scranton, getting his call to the majors in May.

He showed his power in early July, hitting his first - and what turned out to be his only - major league home run. "I savored it as I rounded the bases," Vatcher told The Allentown Morning Call. "I can't wait to see the replay because the pitch was a little outside and I went with it to right."

Vatcher got into 36 games for the Phillies that year, hitting .260. In August, Vatcher was sent to the Braves in the deal that sent Dale Murphy to the Phillies. He played 21 more games that year with the Braves.

For 1991, Vatcher arrived with the Padres, taken off waivers. He got into 17 games in San Diego that year and 13 games the next, marking the extent of his major league career.

Vatcher, though, continued playing in the minors through 1996. His final year, he played at independent Madison. He played his last year of affiliated ball in 1995, mostly at AAA Las Vegas. By then, Vatcher told The Times he was more concerned about being on the field, than returning to the majors.

"I'm just excited to be playing somewhere," Vatcher told The Times. "I'm not concerned at all about being called up."

More recently, Vatcher has returned home to Southern California. In 2011, he was honored by his old high school, Palasades High School. Vatcher is also president of Jaeger Sports, a baseball training organization in Los Angeles.