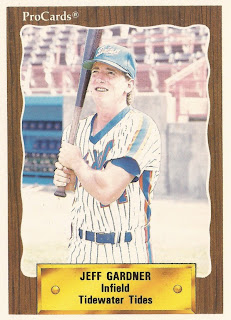 After seven seasons in the minor leagues, Jeff Gardner finally got his first look at the majors in September 1991. He played in 13 games for the Mets getting six hits.

The experience was everything Gardner expected it to be, he told The Los Angeles Times the next June.

"It really is as good as they say," Gardner told The Times. "You get the chartered planes, your bags are waiting for you in your room when you get to the hotel and the per diem is a lot better.
"Getting to play up there kind of made it all worth it," Gardner added to The Times. "I wasn't sure if I'd ever get there."

Gardner's long trip to the majors began in 1994, signed by the Mets as a free agent. He played the next year at single-A Columbia, hitting .294. He made AA Jackson in 1987. He got a two-game tryout with AAA Tidewater in 1988, getting a triple in one game.

By 1989, Gardner was known more his glove than his bat. And even that wasn't that spectacular, according to The Times.

"You need to see him play for two weeks to appreciate him," Tidewater manager Mike Cubbage told The Times in August 1989. "He's sure-handed, and he turns the double play as well as anyone in the major leagues. He does the little things with the bat--bunts and moves guys over--that help the team."

But the Mets had a lot of infielders. Cubbage admitted to The Times that Gardner would likely have to be traded to get his shot. "Frankly, he'll have a hard time making it with this team," Cubbage told The Times.

Gardner did finally make it to the majors with the Mets two years later. That was after having a 17-game hitting streak at one point in June 1991.

After his 13-game stint with the Mets that year, Gardner then got his chance with another team. The Mets traded him to the Padres. He played 15 games for San Diego that next year. Then, in 1993, Gardner became a regular, playing in 140 games for the Padres, hitting .262 with one home run.

"He's not the fastest guy in the world," Gardner teammate and Hall of Famer Tony Gwynn told The Times in June 1993, "he doesn't have the world's quickest bat or greatest range, but he comes to play every day. He's not a flashy type. He gets down and dirty, and he'll ping, pang, pong you to death.

"You have to see him every day to appreciate the things he brings to the table," Gwynn added.
Gardner's success in 1993, however, didn't translate into a permanent home or a lengthy career.

Gardner was released by the Padres following that season. He signed on with the Expos for 1994, only playing 18 more games in the majors.

Gardner played 1995 with the Cubs system at AAA Iowa and his playing days were done.

Gardner went on to be a scout and a minor league manager. He helmed the Eugene Emeralds for two seasons, 2001 and 2002 and the Lake Elsinore Storm in 2003. By 2004, Gardner returned to scouting, remaining there through 2005.

"I played in the big leagues, so I have an idea on how the game should be played," Gardner told The San Diego Union-Tribune in March 2004. "Having managed the last three years, I now have a better idea what the manager and coaches are looking for in a report."