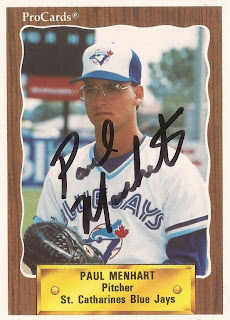 As time wound down in this April of 1995, no one had told Paul Menhart where he was going.

Was he headed down to AAA Syracuse to spend his first time since Tommy John surgery in the minors? Or, somehow, was he going to Toronto?

"It wasn't like something that was posted," Menhart recalled to The Greatest 21 Days in August 2013. "It wasn't something where they said, 'Hey, congratulations.'"

Menhart finally tracked down a teammate, Woody Williams. Williams, then a veteran of two big league campaigns, explained it to him: Menhart needed to get on the bus to the airport, he was going to Toronto.

In Toronto, Menhart got on another bus, the team bus to the SkyDome.

"When we made that turn, and I could see the SkyDome, I can't really tell you the feeling," Menhart recalled. "It was just, 'Wow, my dream's come true.'"

Eighteen months earlier, that dream seemed like the furthest from being realized, Menhart having to break the news to his wife from Puerto Rico, that his pitching elbow had blown out. He needed surgery.
Menhart's elbow injury came at the end of 1993, after his fourth season as a pro.

Toward the end of that season, his elbow began bothering him. But he pitched through it. As long as he could throw, he would, he remembered thinking.

He finally couldn't throw in Puerto Rico, in winter ball. In his second start, his elbow went out. He couldn't throw a ball 20 feet. The prescribed remedy: Tommy John surgery.

"It was a shock, at first," Menhart said. "I'm not going to lie to you, I shed some tears. ... I know when I told my wife that I had to have the surgery, I broke down a little bit."

He was out rehabbing all of 1994. He didn't play again until the shortened post-strike spring of 1995. Through the rehab, Menhart said the outcome, in his mind, was always the same.

"I always knew I was going to make it," Menhart said. "There was never a doubt."

That outcome became a reality that April in 1995. In the team's second game, Menhart made his debut. A usual starter, Menhart came out of the bullpen with one out in the ninth, his Blue Jays up 7-1 over Oakland.

The first major league batter he had to face: Mark McGwire.

"I was nervous as all get out," Menhart recalled of that debut. "My leg was shaking like a leaf. It was amazing. I come set, check the guy at second, and look down at my leg and it was quivering."

Menhart's catcher that day was Randy Knorr, now also with the Nationals, a bench coach in Washington. Knorr, Menhart recalled, calmed him by simply calling for the pitch, a fastball in.

"I was like, let's go to work," Menhart recalled.

Menhart threw it and the slugger swung and missed. On a 2-2 count, Menhart threw a changeup, McGwire swung again and missed again.
Menhart struck him out. He also struck out the next guy, too, ending the game. "It really was a storybook debut."

After a stint back at AAA Syracuse, Menhart got called back by late-July. On Aug. 2, Toronto needed a starter and Menhart was there. He was there to face Baltimore and Cal Ripken at Camden Yards.

This start came just over a month before Ripken was set to break the consecutive games streak. Menhart recalled sitting in the clubhouse before the game, unable to get that off his mind.

What if he hit Ripken and Menhart was the one who ended his streak?

It took Blue Jays sports psychologist Sam McDowell, who saw Menhart stewing, to snap him out of it, Menhart recalled.

"He basically said, 'expletive, bump him,'" Menhart recalled, appearing to change some of the words. "'He's a big boy, he'll get out of the way.'

"And, for some reason, those words just relaxed the daylights out of me," Menhart added.

He ended up going out and throwing a one-hitter, only giving up a second-inning home run to Harold Baines. And he lost, out-dueled by the Orioles' Mike Mussina.

"It was unfortunate that we couldn't get any runs, but, from a selfish standpoint, it was one of the best games that I've ever pitched," Menhart said. "It was something that I'll never forget."

Now in the majors, Menhart had to fight his way to stay. Once his playing career was over, he switched gears to coaching.