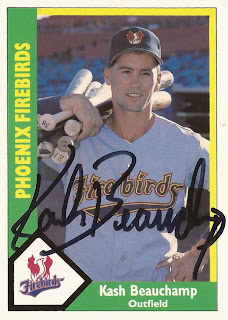 It was the close of Kash Beauchamp's fourth professional season in 1985 and his father was getting to to see his son play professionally for the first time.

It was the first time because Beauchamp's father Jim Beauchamp was also in the minors, as a manager. With his season over, he went and watched his son in the Southern League playoffs.

"That was a big memory for me," Kash Beauchamp recalled recently to The Greatest 21 Days.

It was a big memory because in that first game, Beauchamp recalled, he hit a bases-loaded triple, all as his dad watched.

In the years after, Beauchamp's dad got to see him play even more, from the opposite dugout. And Beauchamp continued to hit well.

"I pretty much wore his ass out when I played against him," Beauchamp said, recalling four or five home runs against his dad's teams. "I really played my best when my dad was in the other dugout or in the stands."

Beauchamp spoke with The Greatest 21 Days by phone recently from his Tulsa-area home. A member of the 1990 Phoenix Firebirds, Beauchamp recounted his professional career, from growing up in Oklahoma the son of a major leaguer, to turning pro himself and pursuing his own major league dreams.
He spoke of his early success, and later injuries that slowed his career. He then spoke of his turn to independent ball, first as a player and later as a manager, where he gained a reputation for defending his players and for sometimes fiery confrontations with umpires.

Beauchamp also spoke about his father, Jim Beauchamp and his impact on Kash's career, the father giving his son tips, but not overly coaching him. His father was also in the minors in 1990, serving as manager of the AAA Richmond Braves. He passed away in 2007. His father was also a bench coach in Atlanta for the winning Braves teams.

Kash Beauchamp's time as a pro began in 1982, taken by the Blue Jays as the first pick in the January draft, out of Oklahoma's Bacone College.

There were also future major league All-Stars on Beauchamp's own team, including Jimmy Key and David Wells. Beauchamp even roomed with Wells briefly, a time referenced in Wells' 2004 book "Perfect I'm Not."
In the book, Wells sets up the story by calling Beauchamp  a "very nice guy," writing the roommate pairing lasted almost two weeks.

Beauchamp called the experience of rooming with Wells the "craziest" of his life. Wells, Beauchamp recalled seemingly fondly, was a 17-year-old who acted like a 5-year-old.

Beauchamp recalled Wells coming back to the apartment early in the morning, drunk and eating cereal. In the book, Wells identified the cereal as Cocoa Puffs. Beauchamp's sleepy response, Beauchamp recalled: "Dude, you have got to go to sleep."

"I'd rather sleep on the floor with two other normal guys," Beauchamp recalled of finally moving out. "I'd never get any sleep, Wells was keeping me up all night. I was like, 'you pitch every five days, I have to play every day.'"

Roommate issues aside, the team gelled, Beauchamp recalled, with the club going on to win the league championship. Beauchamp ended up hitting .318 on the year.

He moved to single-A Florence for 1983, calling that club probably the most talented he played on, with Pat Borders, Cecil Fielder, Fred McGriff and Jose Mesa.

Florence was also managed by former minor leaguer Dennis Holmberg, the manager Beauchamp called one of his favorite managers he played for. Holmberg was in his fifth season managing in the Blue Jays system that year and he remains with the team, recording his 1,300th win in 2012.

"He was the best at getting kicked out of games and putting on shows with umpires," Beauchamp recalled. "He was awesome."
Did Beauchamp pick up any pointers from Holmberg for his own later career as a manager?

"Yeah," Beauchamp said, "I learned a couple of things from old Dennis, that's for sure. He was one of the best."

The next year, at single-A Kinston, Beauchamp recalled having probably the best game he had in his career, and doing it in an All-Star game. Beauchamp went 5 for 6, with a home run, 2 triples and 5 RBI, winning game MVP honors. "The bad thing is," Beauchamp said, "it didn't count on my stats."

Beauchamp made Knoxville in 1985, hitting .276 and helping the team make the playoffs. That was also the series in which Beauchamp's dad got to see him play.

The next year was when Jim Beauchamp got to see his son play from the opposite dugout, as the father managed AAA Richmond and the son played half the year for AAA Syracuse.

Kash started that year back at Knoxville, starting off on fire. In 51 games there, he hit .337, with 8 home runs.

"I was at my best," Beauchamp recalled. "I was healthy. I was running good. I was swinging the bat well."

His power was also starting to develop. Beauchamp said he always felt like he could play center field with anybody, could run with anybody. But his power was never there.
Called up to AAA Syracuse, Beauchamp continued hitting well. Then he got hurt, on that play at the plate in Toledo.

Beauchamp responded by making a suggestion of his own.

"That's kind of the way I was," Beauchamp recalled. "I was kind of a fiery guy. If you wanted to compare my temperament to somebody, it'd probably be more Lou Piniella than Dale Murphy."

Beauchamp finally got his ball and walked. He then stole second, all as the conversation continued, at least on Beauchamp's end.

When the base hit went through and the inevitable play at the plate came and went, Beauchamp was left with a broken shoulder blade.

It also possibly cost Beauchamp his shot at the majors. Beauchamp recalled his father later had a conversation with Blue Jays GM Pat Gillick. Had Kash not gotten hurt, Kash's father learned, Kash likely would have gotten called up to Toronto within days.

As it turned out, though, Kash was out for weeks. He returned by the end of the season, and seemingly returned to form. In his first at bat, he hit a home run. But he also soon went into a slump, seemingly trying to match that home run on every swing.

He went from being on the greatest streak of his career, he recalled, to almost forgetting how to hit. From then on, it was a battle to stay healthy. He had ankle surgery, three surgeries on his left shoulder.

"I was good enough to hang around, play in the minor leagues, get right to the brink and get hurt again," Beauchamp said. "Looking back on it, I felt like the good Lord didn't want me to play in the big leagues, for whatever reason."

In 1988, Beauchamp found himself traded to a new team, the Braves. He also soon found himself playing for his father in Richmond.