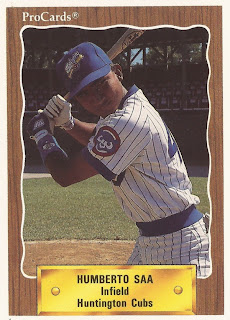 Humberto Saa felt happy and ready to play at rookie Huntington in 1990, he told team officials.

He had just been signed out of Panama and he wanted to play as a pro, and do more.

"I played Little League in Panama and later in the Senior League of Panama Metro," Saa is quoted as saying on his card back. "I want to play in Wrigley Field with the Chicago Cubs."

Saa played at Huntington that year and at short-season Geneva the next. But he never made Wrigley, or played again. His career was limited to just those two seasons.

Saa's career began that year in 1990, signed by the Cubs as an undrafted free agent out of his native Panama.

He started at rookie Huntington. There, he got into 27 games, hitting just .156. That was seven hits in 46 at bats. Only one of those hits was for extra bases, a double.