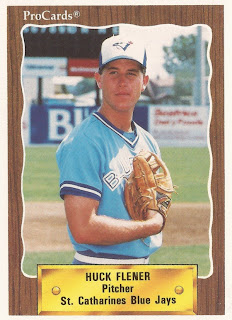 There wasn't much else Huck Flener could do.

The pitch left his hand in this July 1996 contest against Oakland at Toronto's SkyDome and Mark McGwire turned it around into the dome's fifth deck - 488 feet away.

"Did I watch it? Oh, yeah. I've never seen a ball hit that far," Flener told The Los Angeles Times later, "and I don't think I ever will again. I just thanked God no one was on base."

Five years later, there was also little Flener could do when a winter ball pitch came screaming back at his face, according to a Times story later.

This time, in January 2001, there was no watching the ball afterward. This ball hit Flener square in the right eye, destroying it, and his sight in that eye, instantly.

It also ended any hope of Flener resuming his major league career.

Flener's career began in 1990, taken by the Blue Jays in the ninth round of the draft, out of Cal State-Fullerton.

With the Blue Jays, Flener started at rookie St. Catharines, getting 14 outings, seven starts. He made single-A Myrtle Beach in 1991, then high-A Dunedin in 1992.

With the Blue Jays that September, Flener got into six games in relief, giving up three earned runs over 6.2 total innings.

Flener didn't return to the majors until 1996, seeing his 1994 season cut short due to elbow surgery. He then spent 1995 completely with AAA Syracuse.

"After being hurt and having a year taken from me, I'm much more appreciative now," Flener told The AP. "Now I can play in beautiful yards like this, and I'm very happy about that."

Flener came back for eight more outings, one start, for Toronto in 1997, rounding out his major league career.

Flener, though, continued playing in the minors. In 1998, he played with the Indians at AA Akron and AAA Buffalo, then 1999 with the Mariners at AAA Tacoma. In 2000, he moved to the Padres and AA Mobile.

Then, that winter of 2000-2001, Flener went to Venezuela to play winter ball. He told The Times he could see the ball come back at him, but he couldn't pick up its path. It hit before he could do anything. His eye was gone.

The Times spoke with Flener two weeks later, with Flener already making plans to move on, plans he had to make.