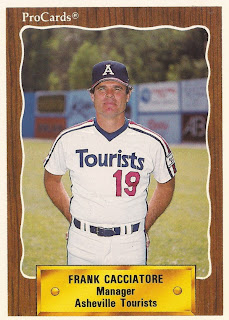 Palm Beach Junior College had a new head coach and that was Frank Cacciatore.

Cacciatore was a former minor leaguer and a member of a collegiate national championship squad. He also wanted to be a coach, according to The Palm Beach Post.

"I've got some big shoes to fill," Cacciatore told The Post in June 1982. "This is a big step up for me. Being a head coach is what I've wanted to do for a long time. It's very exciting."

Cacciatore got that opportunity and took full advantage, taking his teams to three-straight conference titles. He also turned that opportunity into a longer career in the minor leagues, one that continues in 2013.

With the Tigers, Cacciatore played just two seasons, his first at single-A Lakeland. He moved for 1976 to AA Montgomery, but got into just nine games, ending his playing career.

From his time in the minors, Cacciatore soon returned to Florida Southern, serving as an assistant coach. He then took the reins at Palm Beach Junior College.

By 1988, Cacciatore was back in the minors, serving as manager at short-season Auburn in the Astros system. After at turn as coach at AAA Tucson in 1989, Cacciatore became manager at single-A Asheville for 1990.

Cacciatore moved to the Giants system by 1993, coaching at single-A Clinton. In 1996, he served as manager at AA Shreveport, watching over Giants minor leaguer Dante Powell. By mid-June that year, Powell was hitting .303, according to The Los Angeles Times.

"He's doing all the things he needs to do now to progress," Cacciatore told The Times. "He's hitting the ball well, he's stealing bases and he's up among the top players in the league with his on-base percentage."

Cacciatore moved to the Marlins system in 1999, at AA Portland, then to the Mets system by 2006 at single-A Hagerstown. Since 2008, Cacciatore has served as hitting coach at AA Reading, continuing into 2013.

"His rhythm was real good tonight," Cacciatore told The Reading Eagle. "If he can just maintain that same feel, he's got a lot of pop in his bat and he showed it tonight when he got a fastball out over the plate; he hit it easily out there."