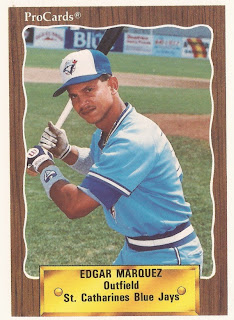 Going into 1990, Edgar Marquez probably was hoping for a higher assignment than short-season St. Catharines.

That's because he had already been there two years before, in his first year as a pro.

But, there Marquez was, assigned to St. Catharines for 1990. It was his third season as a pro. It was also his last.

Marquez' career began in 1988, signed by the Blue Jays as an undrafted free agent out of his native Venezuela.

He played that first year between St. Catharines and single-A Myrtle Beach. At Myrtle Beach, the outfielder Marquez got into 16 games, picking up nine hits in 45 at bats.

For 1989, the then-21-year-old Marquez moved back to rookie ball, getting 22 games Medicine Hat in the Pioneer League, hitting .213.

In 1990, Marquez made his return to St. Catharines. In 36 games, Marquez played the outfield. He even tried two games a new position, catcher. But it wasn't enough. His average sunk to .176, ending his professional career.