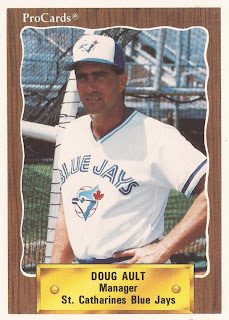 Doug Ault looked forward to competing for a job in the Blue Jays' inaugural starting lineup, he told The St. Petersburg Times in March 1977.

"They're looking for young ballplayers that can do it," Ault told The Times. "I feel like I can do it."

"I hope nobody pinches me and wakes me up," Ault told The Associated Press after that Blue Jays debut. "I've never had a game in which I've hit two home runs in consecutive at bats."

A Blue Jays legend in his first game, Ault went on to hit just 15 more home runs in his major league career. He played in just two more seasons before going into a two-decade-long career in coaching.

In 2004, just over a quarter century after that momentous first day as a Blue Jay, it was Ault who hoped he would wake up, wake up from a nightmare. He never did. After a battle with prescription drug abuse and depression, Ault ended up taking his own life.

Ault's career in baseball began in 1973, signed by the Rangers as an amateur free agent out of Texas Tech University.

He then moved to the Blue Jays, taken in the expansion draft. In 129 games for the Blue Jays that inaugural season, hitting .245, with 11 home runs.

By 1984, Ault was a manager in the minors, at single-A Kinston. In 1985, he moved up to AAA Syracuse, helping players to the majors and to get back.

In 1987, he watched hurler Tom Filer work his way back after elbow surgery, a return Filer would complete the next season.

"A lot of people thought he was finished," Ault told The Philadelphia Inquirer that July. "But they don't know Tom Filer. They don't know the fight he has in him."

Then, a decade after he managed in the GCL, Ault sat inside his car in the driveway of his Florida home, took out a gun and ended his own life.

The Toronto Sun examined the events that led up to Ault's death, pointing to a downward spiral from an addiction to pain killers and despair from the death of his first wife.

In the middle of the story of how his father died, Ault's son Josh also just told The Sun about his father.