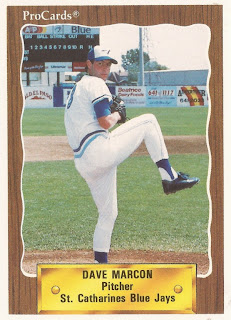 Dave Marcon went through a good stretch for independent Salt Lake in 1991.

In late-July, Marcon went a stretch of more than 22 innings without giving up a single earned run, The Deseret News wrote. In 11 innings before that, he gave up just three.

"His last five starts have been carbon copies," Marcon's manager Nick Belmonte told The News. "He's pretty much been our stopper the last two or three weeks."

Marcon went on to pick up eight wins in 14 starts for Belmonte's Salt Lake City Trappers. He then returned to the team to play under Belmonte again for 1992.

Marcon went on to play in five professional seasons through 1994, never making AA. But he did see Belmonte again.

Their two years at Salt Lake turned into a partnership aimed at helping others make the pros, the Indy Pro Showcase. The effort puts undrafted players or recently released ones in front of pro scouts, getting many signed.

Marcon's professional career began in 1990, signed by the Blue Jays in the 26th round of the draft, out of Oral Roberts University.

For 1991, Marcon moved to Salt Lake in the rookie Pioneer League. He got those 14 starts, going 8-2. During that good stretch, Marcon went 7.1 innings in one game, giving up five hits, but no runs. Marcon also helped the team to the league championship.

That July, Marcon came in for Cedar Rapids, coming in and giving up only two hits over four innings, picking up the win, according to The Cedar Rapids Gazette.

"It's all luck, all being in the right place at the right time," Marcon told The Gazette afterward. My job is to preserve a close game or lead."

Marcon didn't return with the Angels for 1994, getting just two games at independent Regina, ending his career.

Since the end of his playing career Marcon has opened a restaurant near Wayne State University with former minor leaguer Ron Way. Marcon has also gotten together with Belmonte to create the Indy Pro Showcase in 2007.

With the showcase, the two help put players in front of scouts, getting them to independent leagues and to affiliated ball.