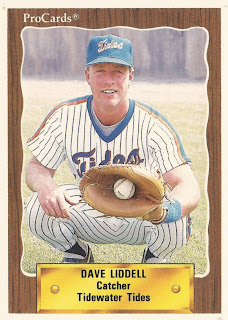 Dave Liddell walked to the plate in the top of the eighth that day, June 3, 1990, for his first major league at bat, his Mets down 8-1.

On the first pitch he saw, Liddell knocked a grounder up the middle for a single. A walk, a fly ball and a wild pitch later and Liddell came around to score New York's second run of the day.

After a bottom of the inning with Liddell behind the plate, the game ended in the ninth, with Liddell on deck.

For Liddell, that last out marked the end of his game, season and career, not even two innings after it began.

Liddell's path to that game began in 1984, taken by the Cubs in the fourth round of the draft, out of Rubidoux High School in California.

Liddell started at rookie league Pikeville, getting just three hits in 46 at bats. He stayed in rookie ball for 1985, hitting .231 in 104 at bats.

He started 1986 at single-A Peoria. By July, he was with the Mets at single-A Columbia, traded there with another minor leaguer for Ed Lynch. In August, Liddell hit a three-run home run in a 10-4 Columbia win.

Around that one brief call-up to the Mets, Liddell hit just .212. Liddell played two more seasons, with the Brewers and Orioles organizations, ending his regular playing career.