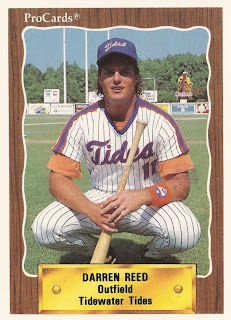 Called into Mets manager Bud Harrelson's office at the close of spring training 1991, Darren Reed thought he was being told he'd made the team. Instead, he'd been traded to the Expos, The South Florida Sun-Sentinel wrote.

The news from Harrelson came with a bit of optimism for the outfielder who'd gotten just 26 big league games in his seven seasons as a pro.

"Bud told me that I'd be a fifth outfielder," Reed told The Sun-Sentinel, "and I would get a lot of playing time."

That optimism soon came to an abrupt end. Days after the trade, Reed took an Alejandro Pena fastball off his left hand. The resulting injury put him out for the year, and left a plate in his wrist.

Reed made it back for 1992, getting into 56 games for the Expos and the Twins, but that and the 26 games he played for the Mets in 1990, proved to be the extent of his big league playing time.

Reed's career began in 1984, taken by the Yankees in the third round of the June secondary draft out of Ventura College in California. Reed played that first year at short-season Oneonta, hitting single-A Fort Lauderdale in 1985. He hit AA Albany-Colonie in 1986.

In December, the Yankees sent Reed to the Mets in a five-player deal that sent Rafael Santana to the Yankees. It was a trade The Boss hesitated to make, The New York Times wrote, fearing Reed might become a slugger for his new team.

He also finally debuted in Queens in May, then returned for August and September. In 26 games, 39 at bats, Reed hit just .205, with one home run.

Part of his big league stint, though, was simply sitting on the bench. Back at Tidewater in June, Reed told The Newport News Daily Press he was happy to be playing again. But it still wasn't the majors.

"I want to play and I want to put up some good numbers here," Reed told The Daily Press. "But I've also been here for awhile. I'm at the point where I might not mind going up and sitting."

Going into 1991, though, Reed made his big for a more permanent spot on the Mets roster. He also made clear that he would choose free agency if he were sent back down to the minors again, The Times wrote.

"I don't blame him," Mets coach Mike Cubbage told The Times. "When we got him, he was one of the youngest kids we had in spring training in 1988. But he's probably made more progress in his total game as anyone else in the organization over the last three years. He's a total package. I'm sure there are lots of teams that could use him."

Then came the trade to the Expos, and the pitch that broke his hand.

That November, Reed returned to the Mets. But he couldn't return to the majors.

Missing all of 1993 due to another injury, Reed returned for parts of three more seasons in the minors, including a stint in replacement ball in spring 1995 with the Braves. His career finally ended in 1996, with 54 games in the independent Northern League, with the Duluth-Superior Dukes.