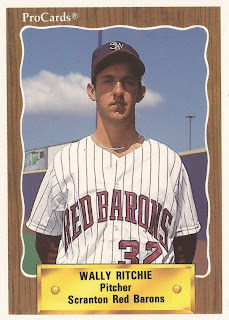 It wasn't a save situation for Wally Ritchie in that August 1991 contest, but it might as well have been.

Coming into the seventh, Ritchie inherited two runners and no outs. Pirates Andy Van Slyke, Bobby Bonilla and Barry Bonds were due up. Ritchie, though, set down all three, ending the threat and sending his Phillies on to a win.

"It's one of the toughest situations you're going to face," Ritchie told The Philadelphia Daily News afterward. "What I've had to learn is that all I can do is throw the pitches I can throw. I can't throw my fastball any harder or anything like that."

Ritchie was in his third season throwing that fastball in the majors. He got just one more.

Ritchie's career began in 1985, taken by the Phillies in the fourth round of the draft out of Brigham Young University.

Ritchie played that first year between short-season Bend and single-A Clearwater. He played the next, 1986, between Clearwater and Reading, going 8-2, with a 2.40 ERA between them that season.

Ritchie then played 1987 between AAA Maine and major-league Philadelphia. Ritchie spent the majority of his time with the Phillies. He got into 49 games that year in relief, posting a 3.75 ERA and three saves in his rookie campaign.

He debuted May 1, narrowly missing his first save May 15. In that game, the reliever Ritchie did get another first, his first major league hit. He came into the game in the eighth, getting five outs, before being lifted.

"The hit was fun, but pitching is what I get paid for," Ritchie told The Daily News later.

Ritchie returned to Philadelphia in 1988, but for just 19 games, with a 3.12 ERA. He spent the rest of the year at Maine, where he turned starter, starting 14 games.

Ritchie continued to start in 1989, getting into 34 games for AAA Scranton, 20 of them starts. None of them were in Philadelphia. It was the same in 1990.

In May 1992, Ritchie got his first save since 1987. "I was nervous out there because those situations are few and far between for me," Ritchie told The Daily News after that save. "But it was fun."

Ritchie played in affiliated ball for two more seasons, at AAA Toledo with the Tigers in 1993 and with the Reds at AA Chattanooga in 1994.

Ritchie returned in 1997 in the independent Western League, playing with Salinas. He stayed in the league for one final season in 1998, with Mission Viejo.

"I'm 32, but being left-handed and getting people out, it does give me another chance," Ritchie told The Los Angeles Times as that 1998 season began. "That's one of the reasons we decided to come back. Before I got past the point where I could come back, we thought we'd better go ahead and try."

Ritchie later became city manager of Santa Clara, Utah, but stayed in the game through volunteering as a high school coach and teaching lessons, according to The Deseret News.

In October 2011, Ritchie returned to his old college, BYU, named the school's pitching coach, serving in that capacity for 2012.

"Wally is an exceptional person who will also lead by example and promote the unique mission of the university and our baseball program," BYU head coach Vance Law told The News. "He is excited to be here and we are excited to have him."