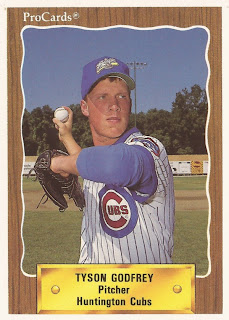 With the choice of college or his shot at the pros, Tyson Godfrey didn't waste time in deciding, The Seattle Times wrote in June 1990.

It took the recent high school graduate just two days to choose the Cubs over the University of Washington, according to The Times.

"I think I'll be able to handle it, doing something I want to do and making a living at it," Godfrey told The Times. "I want to play pro ball. I felt I went in an extremely high round. I would have liked to play at the UW, but I couldn't pass up this offer."

Godfrey eventually made a living at playing baseball for four professional seasons. But he never made it higher than single-A, never making the majors.

Godfrey's professional career began that June, taken by the Cubs in the fifth round, out of Aberdeen High School in Aberdeen, Wash.

Godfrey drew the attention of the Cubs after a season at Aberdeen where he went 7-2, with a 0.82 ERA, according to The Times. The 6-foot, 4-inch right-hander also played basketball, once scoring 39 points in a contest.

With the Cubs, Godfrey spent his first season at rookie Huntington, also getting time at short-season Geneva. Between the two, he went 10-2, with a 3.18 ERA. In early August, Godfrey went seven innings in a loss.

As that season started, Godfrey was quoted on his ProCards card back as saying he would try to make the most of his skills.

"I'm going to do my best and go as far as my abilities will allow," Godfrey was quoted as saying.

Godfrey is credited as returning for one more season, in 1995, at independent Grays Harbor. He went 4-5, with a 6.99 ERA, ending his professional career.