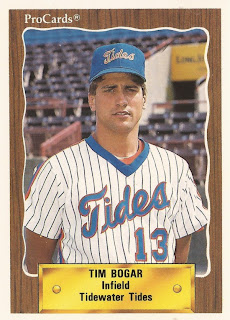 Tim Bogar described his career succinctly to The New York Times in February 1994. By then, he had seven professional years in, one in the majors. He had also developed the reputation, through bad breaks, as a utility man, not an everyday player.

"I've never made an all-star team," Bogar told The Times. "I've never been a star, not even in the minor leagues, but I'm here," said Bogar. "I'm the type of guy that's never noticed, but I'm needed."

Bogar went on to a major league career where he was needed in nine seasons and he's still needed today as the Red Sox third base coach - though some might wish he was needed elsewhere.

Bogar started his career with the Mets, taken in the eighth round of the 1987 draft. Bogar started at short-season Little Falls, making AA Jackson in 1989 and AAA Tidewater in 1990.

It was in 1990 that Bogar suffered the first of two major injuries, suffering a knee injury that put him out most of the year, according to The Times. Then, in 1993, in August, he broke his hand, helping him miss an opportunity to show he could be the everyday shortstop.

Bogar stayed with the Mets through the end of spring training 1997, posting a career high in 1996 with 91 games played. But his batting average was a sub-par .213 and he was released.

Bogar's release was unpopular with his teammates, according to The New York Daily News. "We know as players how much a piece of meat we are." teammate Todd Hundley told the paper afterward.

Bogar caught on with Houston, where he found a home through 2000, when he played in a career-high 110 games. His major league career ended in 2001, with the Dodgers.

He has since gone on to a managing and coaching career. He took the reins of the Astros' rookie league team in Greeneville in 2004, before jumping to the Indians at AA Akron in 2006 and 2007.

His goal is to manage in the major leagues, he told The Bloomington Pantagraph in September 2006.

"I know I'm a long way from being a successful major-league manager - if that happens," Bogar told The Pantagraph. "I'm just learning as much as I can from year to year, and hopefully I'll get a shot at it."

Bogar served with the Red Sox as a coach in Boston from 2009 to 2012. In 2010 and 2011, Bogar served as third base coach, another position that's not always noticed. Early in 2010, Bogar caught flack for mishandling base runners, sending two home in a June game only to see both runners thrown out.

"Obviously nobody out, I made two bad decisions and got two runners thrown out at the plate," Bogar told ESPN.com. "Obviously it's all about results, and obviously both times I was wrong, so I'll take full responsibility for it.''

For 2013, Bogar is serving as a manager in the Angels system, at AA Arkansas.