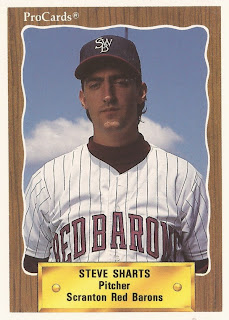 Late in his sixth season as a professional, Steve Sharts told The Los Angeles Times of an effort by a pitching coach to adjust his delivery.

The coach worked to get him to throw over the top, to improve his velocity, he told The Times.

"I wasn't used to that and I was leaving the ball over the plate," Sharts told The Times. "I just went back to a three-quarter delivery and I've been doing great ever since."

With or without the adjustment, Sharts didn't do well enough to make the majors, or, apparently, to be kept on. That season in 1990, at AAA Scranton, was Sharts' last, his career ending without making the major leagues.

Sharts has since gone on to a career in youth coaching, helping younger players with their own deliveries.

Sharts' career began in 1985, taken by the Phillies in the 17th round of the draft out of Cal State Northridge.

"(Sharts) pitched a heckuva ballgame," Carey told The Bulletin. "And he threw the ball as good in the ninth inning as he did the whole game."

Sharts played 1986 largely at single-A Spartanburg, going 5-8, with a 5.97 ERA. He played at single-A Clearwater in 1987, making the transition to reliever.

He moved to AA Reading in 1988, posting an ERA of 2.21 in 46 relief outings. He told The Times that July that he was then the only lefty in the Reading bullpen.

"I enjoy being a reliever," Sharts told The Times. "I don't care how I'm used. As long as I keep pitching well I have a chance to keep moving."

That May, Sharts spoke to The Times about his brother, Scott Sharts, and about his own goals as a AAA player.

"The ultimate goal is for me to pitch against him in the big leagues some day," Sharts told The Times.

But Sharts never made it. It was his final year. By 1998, Sharts began work as the high school baseball coach for Countryside High in Clearwater. He held that job through 2002, when he left to focus his job as general manager at his indoor baseball facility in Tampa, The St. Petersburg Times wrote.

"It was either this or that," Sharts told The SP Times. "I love coaching. It was very hard when we had our team get together Saturday and I told them that I wouldn't be the head coach anymore. But this (being general manager) is how I feed my family."