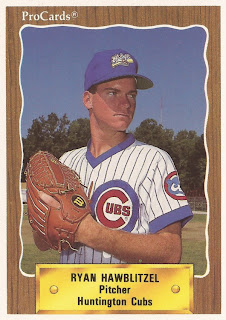 With the 1990 draft coming up, Florida high schooler Ryan Hawblitzel told The South Florida Sun-Sentinel he was ready to turn pro, and he was mentally mature enough to handle it.

Hawblitzel did it. And he made the majors. His stay, though, was brief, just eight relief appearances for the 1996 Colorado Rockies.

Hawblitzel's pro career began with his selection by the Cubs in the second round of the 1990 draft, out of Leonard High School in South Florida.

At Leonard, Hawblitzel's path to that second-round selection came after a senior season where he impressed scouts with a 0.72 ERA by early April, according to The Sun-Sentinel. He also impressed the coach at Palm Beach Community College, Craig Gero, who hoped Hawblitzel would go there.

"What's good about Ryan is when he has his great stuff he can be unhittable," Gero told The Sun-Sentinel, "and even when he doesn't have great stuff, he`s still a great competitor who`s going to win. That's what I look for."

With the Cubs, Hawblitzel started at rookie Huntington, getting 14 starts, posting a 3.93 ERA. He then moved to high-A Winston-Salem and then AA Charlotte in 1991. Between those two levels, Hawblitzel went 16-4, with a 2.58 ERA.

Hawblitzel returned to Charlotte for 1992, going 12-8. He then was left unprotected in the expansion draft, the Rockies taking him with the 38th pick.

After moving to the Rockies system, Hawblitzel told The Sun-Sentinel about his time with the Cubs organization, saying he more or less learned how to pitch with them.

"I see where batters are in the box," Hawblitzel told The Sun-Sentinel, "I look at their hands ... I'm learning how to recognize what a hitter can do without ever having seen him before."

Hawblitzel then returned to Colorado Springs for 1996. Then, in June, he got his call to the Rockies. He debuted June 9, going two innings and giving up two earned runs.

In a June 19 outing against Montreal, Hawblitzel went two innings, giving up just a walk. He also impressed his manager Don Baylor, keeping the Rockies in the game, according to The Associated Press.

"(Hawblitzel) saved the game for us," Baylor told The AP. "I thought he did a great job."


Hawblitzel got into a total of five outings that month, including one where he walked in the go-ahead run and picked up the loss. He then got into two more in late July and one final game in early August. In all, he pitched 15 innings, giving up 10 earned runs.