Roger Samuels, Getting an Opportunity - 543 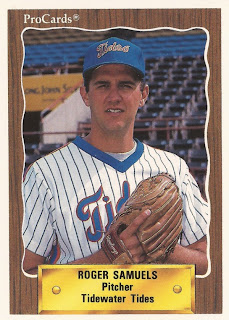 Roger Samuels believed he'd already shown he could get big league hitters out, he told The Allegheny Times in May 1989. He was just looking to show it some more.

"It's just a matter of getting an opportunity more than anything," Samuels told The Times. "I was in a situation where the opportunities weren't that great."

Samuels was looking for that opportunity after having just been traded to the Pirates from the Giants. He'd pitched in 15 games for the Giants in 1988. He would only pitch in five more for the Pirates, rounding out his major league career.

Samuels' career began in 1983, drafted by the Astros in the 10th round of the June draft. He played that year at short-season Auburn and single-A Asheville. He went 6-6 with a 3.84 ERA between them.

Samuels made AA Columbus in 1985, going 10-9 with a 3.96 ERA. He returned to Columbus for 1986, shifting his talents to reliever. He got into 38 games that year, starting three. His ERA also increased to 5.10, enough for the Astros to give him his release that off season.

For 1988, it was AAA Phoenix for Samuels and then San Francisco. Samuels debuted for the Giants July 20 against the Cubs, pitching two hitless innings. In his 15 appearances, the reliever picked up two losses and one win.

The one win, his only one in the majors, came Sept. 20 against the Braves. He went 3.1 innings, giving up only one hit.

Samuels started 1989 at Phoenix again, before he was traded to the Pirates for Ken Oberkfell. Samuels was 28 years old.

"Our scouts think (Samuels) has a chance," Pirates GM Larry Doughty told The Pittsburgh Post-Gazette. "It's a little unusual to think of a guy that age as a (major league) prospect, but it's less unusual with a pitcher than an every-day player."

Samuels made it to Pittsburgh two weeks after the trade. He got just over a week with the Pirates, pitching 3.2 innings and giving up four earned runs. He was then sent back down.

Samuels returned for 1990, starting at AAA Buffalo with the Pirates organization then quickly signing on with the Mets at AAA Tidewater. He got into 35 games with the Tides, with a 2.83 ERA, but didn't return to the majors, his professional career ending with the season's end.