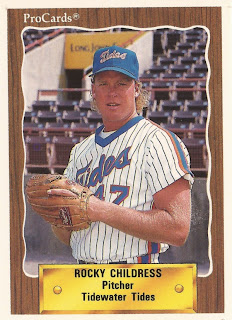 Having just been cut from AAA Tucson in 1991, Rocky Childress began contemplating life without baseball.

The California-native's plans included returning to Bend, Ore., where he'd met his wife playing for the rookie league Bend Phillies in 1981, and becoming a plumber, according to The Arizona Daily Star.

"The only thing I'm bummed out about," Childress told The Daily Star, "is that I had a good year last year, and I didn't get picked up. I want one last chance. If I fail, fine. But I haven't failed yet."

Childress spoke at the end of a decade-long pro-baseball career, one that began after being taken by the Phillies in the 21st round in 1980 and being sent to the rookie league Helena Phillies, then Bend in 1981 and Spartenburg in the South Atlantic League in 1982.

He made AAA Portland in 1985, the May getting the big call up. He got the call in mid-flight, informed by his manager, Childress told The Reading Eagle. He landed and he was on his way to Philadelphia, he couldn't even get through to his wife.

Once he arrived in Philadelphia, he also quickly made it into a game.

"I tell you," Childress told The Eagle, "my heart started to beat and my knees began to knock."

Childress pitched in 16 games for the Phillies that year, two the next. His high water mark would be in 1987, with 32 games pitched with the Astros.

Childress pitched in 11 more games for Houston in 1988, his final major league appearance coming Oct. 1, in relief. That day, Childress came in for Bob Forsch, pitching 4.1 innings and striking out eight.

He spent 1989 at AAA Tucson, 1990 with the Mets at Tidewater, then back to Tuscon for 1991. But he wasn't completely done. Back in Bend, Childress is credited as returning four years later for 15 more games, this time with the independent league Bend Bandits.