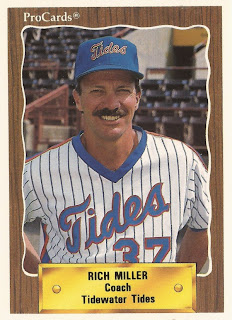 Rich Miller knew the bus rides, he knew the plane trips. He'd been through all that, he told The Newport News Daily Press in August 1990.

The Tidewater Tides third base coach also knew what it was like to be a young player in the minors with hopes of getting to the majors.

"I know what they go through," Miller told The Daily Press, "the ups and downs, the ins and outs. I've done it for 18 straight seasons."

He'd done it as a player, as a manager and as a coach. He'd also done it without making the majors. In the two decades since, Miller has continued as a coach and coordinator. He's also continued to relay those lessons to players on their way to the majors, never getting there himself.

Miller's minor league baseball career began in 1973, taken by the Mets in the sixth round of the draft out of West Chester University. He made AA Victoria in 1974, then AAA Tidewater in 1976.

With Victoria in 1974, Miller knocked in the winning run in an August game. In August 1976, Miller hit a two-run home run to help Tidewater to a win. But, for Miller's efforts, he wasn't called up to Queens. His playing career ended after 1980, back at AA Jackson.

That's when his coaching career began. For 1981, Miller took the helm at short-season Little Falls, then single-A Shelby for 1982. For 1984 and 1985, Miller managed at single-A Columbia, all in the Mets system.

He returned to Little Falls for 1986 and 1987. He then turned hitting coach for Tidewater in 1988, the same time he'd played for a decade earlier.

In 1990, Miller served as the Tides' third base coach, sending signs to his hitters. In one June game, Miller gave the sign to hitter Mike DeButch, calling for a bunt. The squeeze was on, and it worked.

Miller stayed with the Mets into the 1990s, serving as a roving instructor. In 1998, as the Mets' minor league outfield coordinator, Miller tried to teach Todd Hundley to play outfield.

''I told him there's a good chance of him becoming an adequate outfielder,'' Miller told The New York Times in June 1998. ''He's a good athlete and this is a new challenge. He just doesn't have his legs or his wind yet.''

Miller joined the Twins and the Rochester Red Wings in 2004 as hitting coach, staying there for four seasons. In 2009, he moved to single-A Beloit.

For 2010, Miller joined the Blue Jays as Toronto's minor league outfield and baserunning coordinator. The Blue Jays were looking to work on their speed on the base paths, GM Alex Anthopoulos told MLB.com that February.

"We added a baserunning coordinator this year," Anthopoulos told MLB.com, referring to Miller. "We're excited about him - someone to spend a little more time to focus solely on that."