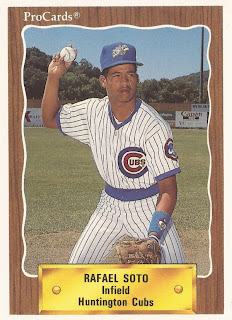 "I'm happy to play in a large, supportive town," Soto is quoted as saying on his card back. "Before coming here, I played in my native Dominican Republic. I want to someday play in Wrigley Field."

Soto played that year with the Cubs at rookie Huntington. He then played the next three seasons in the Cubs system. He never got to play in Wrigley Field, or anywhere else in the majors.

Soto's professional career began that year, signed by the Cubs as an amateur free agent, out of his native Dominican Republic.

In that first season at Huntington, Soto got into 42 games, picking up just five hits in 59 at bats, for a .085 average.

For 1991, the teen moved to single-A Peoria, improving his average to .202 on the year over 108 games. He knocked in 19 runs and stole eight bases. He also picked up 11 sacrifices, still tied for 12th all time for Peoria.

In one July game, in front of a packed house for a Rick Sutcliffe rehab start, Soto picked up three hits, scoring twice and knocking in one, according to Malamut.net.